WASHINGTON - The United States is preparing to raise tariffs on almost all Chinese imports that remain untaxed, valued at US$300 billion (S$408 billion), after trade talks between both sides ended on Friday (May 10) without a deal or an end to tariffs in sight.

President Donald Trump ordered trade officials to begin the process of drawing up a new round of tariffs, prior to a final decision, said US Trade Representative Robert Lighthizer in a statement on Friday.

The tariffs are a one-two punch for Beijing, coming on the heels of Friday morning’s tariff hike which more than doubled levies on US$200 billion of Chinese goods from 10 per cent to 25 per cent.

Mr Trump first raised the possibility of further tariffs last Sunday. If he proceeds with this second round, essentially all Chinese exports to the US - valued at nearly US$540 billion last year - will be subject to punitive tariffs.

Mr Lighthizer’s announcement dramatically raises the stakes and ramps up pressure on the Chinese to agree to Washington’s terms. But it also increases the political difficulty of doing so, as Beijing is reluctant to appear to have capitulated to American demands under duress.

“Such an easy way to avoid tariffs? Make or produce your goods and products in the good old USA. It’s very simple!” Mr Trump tweeted yesterday, although economists have pointed out that global supply chains mean products and parts are rarely made entirely in one country nowadays.

The outcome of Friday’s talks indicate that Chinese Vice-Premier and lead negotiator Liu He did not seem to have the authority to make changes in key positions or renegotiate the backtracking that precipitated America’s about-turn last weekend, said Eurasia Group analysts Michael Hirson, Paul Triolo and Todd Mariano in a note.

“This shows Xi and other senior Chinese leaders are willing to accept an escalation of the trade dispute over what they perceive as a direct and intolerable challenge to China’s sovereignty, in the form of US demands that China make substantial changes to key laws and regulations to formally enshrine China’s concessions,” they said. 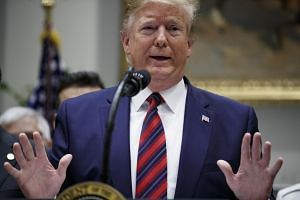 US negotiators have told their Chinese counterparts that Beijing had three to four weeks to reach an agreement before the Trump administration introduces the new tariffs on essentially all remaining untaxed Chinese imports, said a Bloomberg report citing two people familiar with the talks.

But the Eurasia Group analysts said Mr Lighthizer will proceed in a deliberative manner, given that the next tranche of tariffs will almost by necessity impact US households and could include items previously exempted like Apple iPhones..

This means the earliest that additional new tariffs could be imposed would likely be mid-to-late June, they said.

“Those new tariffs would be added leverage for Trump to hold over Xi at a G-20 meeting, making it unlikely that he would deploy them in advance—unless Beijing ups the ante by pursuing aggressive non-tariff punitive measures,” they added.

Beijing has vowed to retaliate against Friday’s 25 per cent tariff hike, although it has not yet spelled out how.

Mr Trump had earlier on Friday called the two days of talks “candid and constructive”, and said that conversations would continue into the future. His relationship with Mr Xi remained very strong, he added.

“In the meantime, the United States has imposed tariffs on China, which may or may not be removed depending on what happens with respect to future negotiations,” said Mr Trump on Twitter, hours after the tariffs went into effect.

Friday’s talks were short and ended by noon. Chinese vice-premier and lead negotiator Liu He will head back to Beijing, which has vowed retaliation against the latest round of US tariffs.

After the meetings, Treasury Secretary Steven Mnuchin told reporters that discussions had been constructive while Mr Liu said the talks had gone fairly well.

No further talks have been planned as of now, said Mr Mnuchin. Chinese state media however reported Mr Liu as saying that both sides had agreed to meet again in Beijing.

“Negotiations have not broken down, but rather on the contrary, this is only a normal twist in the negotiations between the two countries, it is inevitable,” Liu told Chinese media.

“Both sides agree they will meet again in Beijing in the future and keep pushing forward the negotiations,” he said without giving a date.

Although Liu deemed the two days of talks in the US “productive” he said differences continued to exist, according to Agence France-Presse.

“We have a consensus in lots of areas but to speak frankly there are areas we have differences on, and we believe these concern big principles,” he said.

Mr Trump and Mr Xi are next scheduled to meet at June’s G-20 summit in Osaka, Japan, but experts increasingly view the chance of a trade deal by then as slim.

The possibility of a long breakdown, one that lasts even through the US presidential election, has risen substantially, said the Eurasia Group analysts.