WASHINGTON (BLOOMBERG, AFP) - The United States House gave support to pro-democracy protesters in Hong Kong by passing a Bill that would require an annual review of whether the city is sufficiently autonomous from Beijing to justify its special trading status under US law.

The Hong Kong Human Rights and Democracy Act is one of four measures passed by the House on Tuesday (Oct 15) in unanimous voice votes.

The Bill provides for sanctions against officials "responsible for undermining fundamental freedoms and autonomy in Hong Kong".

A similar Bill is also before the Senate, though the timing of a vote there remains uncertain. The legislation has bipartisan support in both chambers.

“Today we’re simply urging the Chinese president and the Hong Kong Chief Executive, Carrie Lam, to faithfully honor the government’s promises” that Hong Kong’s rights and autonomy would be protected, Republican Representative Chris Smith, prime sponsor of the Bill, said on Tuesday on the House floor.

Thousands of protesters gathered on Monday in Hong Kong's central district to support the legislation, many of them waving American flags.

A spokesman for the Hong Kong government "expressed regret" over the rally calling for the US legislation's passage.

"Human rights and freedoms in Hong Kong are fully protected by the Basic Law, the Hong Kong Bill of Rights Ordinance and other legislation. The HKSAR government attaches great importance to them and is determined to safeguard them," the spokesman said, referring to the Hong Kong Special Administrative Region.

China’s relationship with the United States will be damaged should the legislation become law, Foreign Ministry spokesman Geng Shuang said in a statement. 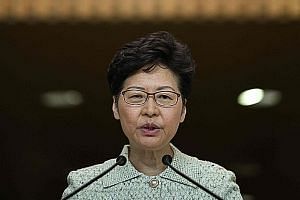 “What Hong Kong faces is not the so-called human rights and democracy issue at all, but the issue of stopping violence, reinstating order and upholding the rule of law as soon as possible,” said Mr Geng in the statement.

The House passed H Res 543, a resolution reaffirming the relationship between the US and Hong Kong, condemning Chinese interference in the region and voicing support for protesters, some of whom have visited Capitol Hill in recent weeks.

Also passed was the Protect Hong Kong Act, HR 4270, which would halt the export to Hong Kong of crowd-control devices such as tear gas and rubber bullets.

The Bill is intended to prevent police in Hong Kong from using those non-lethal weapons on protesters.

In addition, the House adopted a resolution introduced by Foreign Affairs Committee chairman Eliot Engel and top Republican Michael McCaul, which commends the Canadian government for starting extradition proceedings in the US case against Huawei executive Meng Wanzhou.

The resolution, H Res 521, also calls for the release of two Canadian nationals and due process for a third sentenced to death for drug smuggling.

Mr Hawley said on Twitter that he called Hong Kong a "police state" on purpose "because that is exactly what Hong Kong is becoming".

On Wednesday, China's Hong Kong and Macau Affairs Office (HKMAO) accused the US of "grossly interfering" in its internal affairs, and openly cheering on opposition and radical elements in Hong Kong.

HKMAO spokesman Yang Guang said in a statement that some protesters had in recent weeks "seriously infringed" the basic human rights and personal safety of police officers and the general public through the use of violence, including petrol bombs and a homemade remote-controlled explosive device.

"For this pile of crimes committed by the Hong Kong rioters, the US House of Representatives and some politicians have chosen not only to turn a blind eye, but to confuse right and wrong and confound black and white," he said. "This is tantamount to abetting the wicked, and (the US) has to bear the blame."