LONDON (AFP) - Travellers from more than 70 "low-risk" countries and territories will no longer have to self-isolate when arriving in England, the British government said on Friday (July 3) in a major easing of its coronavirus quarantine scheme.

The list of exemptions mostly covers Europe - but not Portugal - and the Caribbean, Australia and New Zealand, although the United States and mainland China are notably omitted.

The changes, which come into effect on July 10, represent a significant lifting of the mandatory 14-day self-quarantine imposed one month ago to stop new infections from abroad.

Britain has suffered Europe's deadliest outbreak of Covid-19, with 44,000 deaths among confirmed cases, but is now slowly coming out of lockdown.

Airlines, who had warned the quarantine would cripple an industry already on its knees due to global coronavirus shutdowns, welcomed the easing and three of them dropped a legal challenge.

But the exemptions will only apply to arrivals into England, with Scotland, Wales and Northern Ireland so far sticking to the blanket ban.

British ministers had suggested the delay in announcing the list - it had been due earlier in the week - was down to a lack of cooperation from the devolved government in Scotland.

She said the list her government was shown on Thursday had changed by Friday, while adding that Edinburgh would likely publish its own list in the coming days.

Under the new rules, a traffic-light system - red, amber and green - would be used for different countries depending on their prevalence of the coronavirus, Shapps said.

Travellers from the green and amber countries will no longer have to self-isolate on arrival. 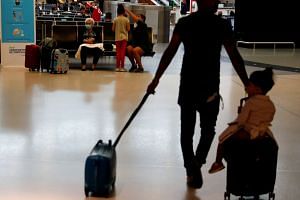 The amber countries will have reciprocal arrangements in place with England, while the green countries are deemed to be safer than England, such as New Zealand.

The amber countries include France, Italy and Spain, which are among the most popular summer holiday destinations for Britons, although not Portugal.

The United States will be designated with a red light, requiring mandatory self-quarantine, because "they have got very high numbers of infections", Shapps said.

British Airways, easyJet and Ryanair had taken legal action over the scheme they said would have a "severe impact on the travel and tourism industry", which was "already running on fumes".

But their lawyer told the High Court of England and Wales in London on Friday that they had now agreed to withdraw the claim.

In a statement, budget airline easyJet said the list of exemptions was "an important move in the reopening of aviation, to support the wider UK recovery".