LISBON (REUTERS) - Portugal's tourism sector reacted with fury and disbelief at Britain's decision to maintain a quarantine regime for travellers coming from Portugal despite having a higher number of coronavirus cases and deaths.

Portugal was left off a list of more than 50 countries that Britain considers safe enough for travel without coronavirus-related restrictions, meaning holidaymakers returning from Portugal would have to quarantine for 14 days.

That will be a major deterrent for British tourists, who accounted for 2.1 million of Portugal's foreign visitors last year, the second biggest market after Spain.

"Restaurants have adapted, all areas are sanitised, masks are mandatory, hospitals are prepared, doctors were trained. The region has adapted," said Antonio Pina, a mayor from the tourism-dependent southern Algarve.

Over a dozen countries have imposed restrictions on travel from Portugal as a doggedly high toll of several hundred new cases per day concentrated on the outskirts of Lisbon in the past month has worried authorities.

"The outbreak is in peripheral Lisbon where there are no hotels, no tourist restaurants," noted Raul Martins, head of Portugal's Hotel Association.

"It has been poorly explained to the British."

Portugal's number of new cases per 100,000 inhabitants is currently the second highest in Europe after Sweden, according to data from the European Union's (EU) disease control centre.

Portugal attributes this to its high testing rate, though Britain has surpassed Portugal in terms of tests per million people, according to the worldometer.info website.

"We were penalised for speaking the truth at a time when it is important to be transparent," said Joao Fernandes, head of the Algarve's tourism authority. 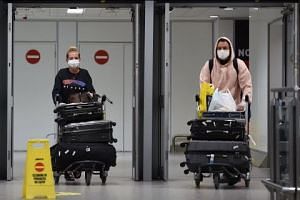 US, China left out as England slashes coronavirus quarantine list

In a tweet, the foreign ministry said "it is absurd that a country, the UK, with 28 times more deaths than Portugal due to #covid-19, imposes quarantine on passengers from Portugal".

"We hope that this decision, which seems to us profoundly unfair and wrong from the British authorities, is corrected as soon as possible," Foreign Minister Augusto Santos Silva told reporters.

"Countries that are friends treat each other differently."