WASHINGTON (NYTIMES) - United States President Donald Trump's cautious distance from Hong Kong's pro-democracy movement has left him politically isolated from both parties in Congress, the State Department, European allies and his most hawkish advisers at the White House.

Despite ringing declarations of support for the protesters from leading Democrats and Republicans as well as European officials, Mr Trump has shown little sympathy for the mass demonstrations against China's encroaching political influence on the former British colony.

And in his almost-singular focus on his showdown with Beijing over trade and tariffs, Mr Trump is ignoring the view of his conservative advisers, who believe that China's authoritarian model threatens American interests worldwide.

Speaking to reporters as he headed to a campaign event on Thursday (Aug 15), Mr Trump was complimentary toward China's President Xi Jinping. "I really have a lot of confidence in President Xi," Mr Trump said, predicting that if the Chinese leader met protest leaders, "things could be worked out pretty easily."

Mr Trump offered no words of support for the goals of the protesters, which include preventing China's repressive political system from subsuming Hong Kong's open society.

Two senior administration officials said top foreign policy advisers to Mr Trump have pressed him to take a more forceful public stand on Hong Kong, as the pro-democracy protests escalated, along with police violence against them.

One tough internal critic of China's government is Mr Trump's national security adviser John Bolton, who in an interview on Wednesday with Voice of America used far stronger language than Mr Trump has about the protests.

"The Chinese have to look very carefully at the steps they take, because people in America remember Tiananmen Square, they remember the picture of the man standing in front of the tanks," Mr Bolton said, referring to the 1989 demonstrations that China's government brutally repressed, killing hundreds of unarmed people. "It would be a big mistake to create a new memory like that in Hong Kong," Mr Bolton added.

The State Department, also using language tougher than the President's, issued a statement on Tuesday saying it was "staunch in our support for freedom of expression and freedom of peaceful assembly in Hong Kong", sympathetically noting the protesters' "broad concerns about the erosion of Hong Kong's autonomy".

Mr Trump has conspicuously avoided that kind of language as he seeks to negotiate a trade agreement with Beijing. On Twitter and in comments this week, he has sounded ambivalent about the Hong Kong unrest, saying that he hopes "it works out for everybody, including China". 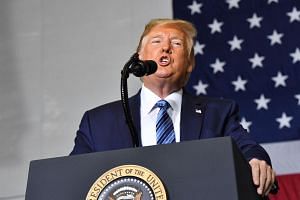 Mr Trump has also shown sympathy for Mr Xi. In a tweet on Thursday, he called the Chinese President "a great leader who very much has the respect of his people", who can bring the Hong Kong crisis to a "happy and enlightened ending". To many of the Hong Kong protesters, Mr Xi is an untrustworthy tyrant determined to squelch their political freedom.

Mr Trump's speech is also in sharp contrast to the words of Republicans and Democrats, who are warning Mr Xi of grave consequences, including congressional action, should he order a bloody 1989-style crackdown. Fears of such a response grew this week after images circulated online of a buildup of Chinese military forces near Hong Kong, which Beijing says is part of a long-planned exercise.

Senator Lindsey Graham, who often advises Mr Trump on foreign policy, tweeted on Tuesday that "30 years after Tiananmen Square all Americans stand with the peaceful protesters in Hong Kong".

House Speaker Nancy Pelosi said in a statement that the protesters "have inspired the world with the courage and determination with which they are fighting for the freedom, justice and true autonomy that they were promised".

Similar messaging has come from European allies. "I do support them, and I will happily speak up for them and back them every inch of the way," British Prime Minister Boris Johnson said of the protesters last month, arguing that China must honour Hong Kong's autonomy.

Mr Trump's language shows little connection to his administration's stated intolerance for China's political repression. An official national security strategy that the Trump White House released in December 2017 declared Beijing to be a strategic competitor whose political system must be confronted along with its economic and military strength. The document quotes Mr Trump as saying that the US will "raise our competitive game" to "protect American interests and to advance our values".

The drama in Hong Kong is only the latest example of Mr Trump's disinclination to let human rights and democracy complicate his diplomacy. He has taken no position on recent mass protests in the streets of Moscow, which have constituted the most open challenge in years to President Vladimir Putin of Russia, with whom Mr Trump has a friendly relationship.

Mr Trump also rarely criticises the repressive practices of several other governments with which he has forged close alliances, including Saudi Arabia, Egypt, Turkey and Poland. 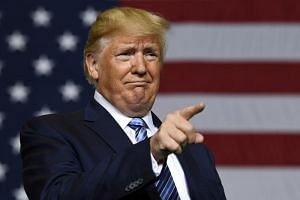 Trump says any trade deal with China must be on 'our terms', urges Xi to meet Hong Kong protesters

The crisis in Hong Kong has cast a particularly bright spotlight on the role of western democratic values at a moment when authoritarian politics are on the rise across the globe. Mr Trump's critics call this a vital moment to reassert American leadership.

"If America does not speak out for human rights in China because of commercial interests, we lose all moral authority to speak out elsewhere," Ms Pelosi said in her statement.

"Our democratic allies are looking to us for leadership," said Mr Daniel Kliman, a former Pentagon official and director of the Asia-Pacific Security Programme at the Centre for a New American Security.

Mr Trump's defenders say he has good reason to tread carefully. One is that Mr Trump has limited tools for backing up any tough words; it is unthinkable that the US military would come to the protesters' rescue.

Another is that China's government has openly accused the US of instigating the protests as part of a covert regime-change strategy, and support from the White House could play into Beijing's narrative. The Chinese state news service Xinhua reported on Thursday that China's Foreign Ministry office in Hong Kong had condemned "certain US politicians for colluding with the extremist and violent offenders" there.

"Western leaders have a fine line to walk: Supporting the democratic aims of Hong Kong protesters without feeding paranoia in Beijing that the demonstrations are a foreign conspiracy to divide and weaken China," said Ms Jessica Chen Weiss, a China scholar and professor at Cornell University. "As for Trump, his actions speak louder than his words."