"Of course China wants to make a deal. Let them work humanely with Hong Kong first!" Mr Trump said on Twitter from vacation at his golf course in Bedminster, New Jersey.

He said: "I have zero doubt that if President Xi wants to quickly and humanely solve the Hong Kong problem, he can do it."

"Personal meeting?" he added in what appeared to be an idea for offering his own help to President Xi directly.

He also said that the decision to postpone some tariffs on China to December "helps China more than US. But will be reciprocated".

Earlier, a State Department spokesman voiced concerns about the "continued erosion" of Hong Kong's autonomy and expressed "staunch" support for freedom of expression and peaceful assembly in the territory.

"The United States is deeply concerned by reports of Chinese paramilitary movement along the Hong Kong border," the spokesman, who would not be named, told AFP in a statement. 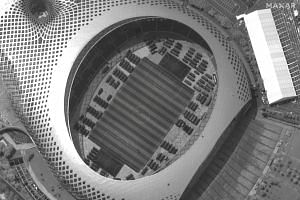 US 'deeply concerned' by Chinese paramilitary on Hong Kong border

"The United States strongly urges Beijing to adhere to its commitments in the Sino-British Joint Declaration to allow Hong Kong to exercise a high degree of autonomy."

Mr Trump's latest comments came a day after he appeared to take a hands-off position on the protests.

Mr Trump, who has been seeking a major deal to correct trade imbalances with China, has faced criticism from Congress and elsewhere for not taking a stronger public line on Hong Kong and for his characterisation of the protests earlier this month as “riots” that were a matter for China to deal with.

"The Hong Kong thing is a very tough situation. Very tough. We'll see what happens," he had said.