WASHINGTON (BLOOMBERG) - President Donald Trump said he launched targeted missile strikes with France and the UK on Syria in retaliation for an apparent chemical attack by the regime of Bashar al-Assad on a rebel town.

Mr Trump said the missile strikes were focused on chemical weapons sites and he made clear that the US is prepared to sustain the strikes until Syria stops using those weapons.

"The purpose of our actions tonight is to establish a strong deterrent against the production, spread and use of chemical weapons," he said in a televised address from the White House.

"We are prepared to sustain this response until the Syrian regime stops its use of its use of prohibited chemical agents."

The President also blasted Iran and Russia for supporting Mr Assad's regime, particularly in the wake of the suspected chemical attack.

"To Iran and to Russia I ask: What kind of a nation wants to be associated with the mass murder of innocent men, women and children?" he said. "The nations of the world can be judged by the friends they keep."

The strike comes just over a week after Mr Trump repeatedly said he wanted to withdraw US troops from Syria "soon", though his statement on Friday signalled a possible longer term involvement.

Mr Trump's statement on US policy toward Syria came after days of speculation that the US would launch a strike against Syria in retaliation for an apparent chemical weapons attack last weekend that killed scores of civilians.

A US military response was widely expected to include missile strikes.

An assault has been anticipated since Mr Trump vowed last Sunday to respond forcibly to a "horrible attack" on Douma, a town outside Damascus that was among the last strongholds for rebels opposed to Mr Assad.

Estimates of civilian casualties ranged from 21 to more than 78.

But the President also made clear that the US actions have limits and that the US commitment to acting in the Middle East won't last forever.

"We will try to make it better," Mr Trump said. "But the Middle East is a troubled place."

That was the first direct American assault on Mr Assad's forces since the conflict in Syria began in March 2011.

Some Democrats criticised Mr Trump's decision, saying the launch was reckless and conducted without congressional approval.

"Absent a robust diplomatic process, military strikes will not change Assad's calculus regarding the use of chemical weapons against his own people," Democratic Senator Ed Markey of Massachusetts said in a statement. "President Trump has failed to launch a multi-faceted diplomatic process in Syria and appears ready to repeat that failure again."

But other Democrats said that Syria needed to pay a price for its actions.

"I support the attack because Assad must be held accountable for the use of chemical weapons," Democratic Senator Bill Nelson of Florida said on Twitter.

The attack in Douma complicated Mr Trump's plans for the region. Before reports of the latest chemical attack, Mr Trump said the American military would be withdrawing from Syria "very soon", once the defeat of Islamic State in Iraq and Syria (ISIS) militants was secured.

Last weekend, he condemned the chemical attack in a tweet and warned there would be a "big price to pay".

He also for the first time tweeted direct criticism of Russian President Vladimir Putin, after long maintaining they could work together. 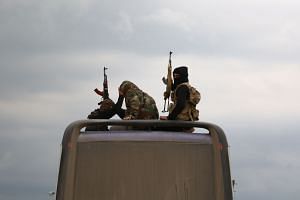 Syria strikes: The targets, the assets used and the reactions

Mr Trump told Moscow on Wednesday to "get ready" for an American missile strike in Syria, after a Kremlin diplomat said that any rockets aimed toward Russian forces there - as well as any plane or ship that fired them - would be targeted.

Hopes of averting a direct confrontation rose, however, after Mr Trump seemed to hold off as he consulted allies, and a senior Russian official said the envoy's threats had been misinterpreted.

He has advocated for a more assertive American posture in the region to counter Iran's influence.

Iran and Russia have backed Mr Assad in his effort to defeat rebels that sought to overthrow him since he moved to suppress a groundswell of protests at the height of the Arab Spring movement.

Syria has denied using banned chemical weapons in a war that has killed more than 500,000 people and displaced half of the pre-war population of 23 million.

Its official Sana news agency scoffed at the reports that chemical weapons had been used in Douma, citing an unidentified official who said government forces advancing on the town didn't "need to use any chemical weapons as the media channels that support the terrorists are fabricating".

Russia has variously said there was no chemical attack in Douma or that the US and its allies orchestrated it to undermine Mr Assad.

There are about 2,000 US troops in Syria, advising forces fighting against ISIS fighters clinging to ever-shrinking territory, particularly along the border with Iraq.

As part of his "America First" campaign pledge, Mr Trump had promised to remove the US from costly and prolonged foreign entanglements.

The continuing involvement of American forces in Syria, Iraq and Afghanistan, where the US has fought extended conflicts since Sept 11, 2001, continues to be a source of consternation for him.

The White House has said the mission to fight ISIS in Syria was "coming to a rapid end" while offering no timetable for US withdrawal.

During simultaneous events in Washington last week, the President said he would make a decision "very quickly" on when US troops would pull out of Syria while his top commander in the region - Army General Joseph Votel, head of US Central Command - said he saw a continuing role for the US military in helping to stabilise the divided country.