BEIRUT (WASHINGTON POST) - The day had begun much as any other over the past two months in the rebel-held town of Douma east of the Syrian capital, Damascus.

But when gasping, trembling people, some of them foaming at the mouth, began streaming into one of the town's few functioning clinics that evening, staff instantly knew something was different.

The victims emitted a powerful smell of chlorine, but there were more people affected than in previous chlorine attacks, said Mr Mohammed Marhoum, a medical worker. He saw around 70 and said six of them died.

They also seemed to be more severely affected than those he had treated after previous chlorine attacks, and they displayed symptoms he had never seen before.

Some were twitching, others had abnormal pupils, and some were foaming at the mouth. Several arrived at the hospital unconscious.

He and the other medical workers began to suspect that whatever killed them may have been stronger than chlorine. "We believe the gas used was chlorine and another kind of gas," he said. 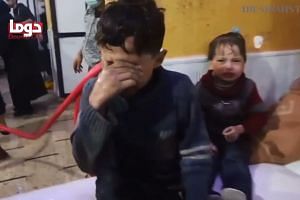 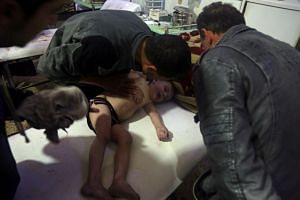 US, allies discuss military response to Syria gas attack as Russia, US clash at UN

At around midnight, the last two victims were brought in, a boy and a girl, both around 2 years old, both dead.

"Their bodies were cold and stiff. Their mouths were foaming. They didn't have any wounds. It was obvious that they had suffocated," Mr Marhoum said.

Exactly what happened on Saturday (April 7) night may never be established with certainty.

Medical workers claim a large number of people suffering unusual symptoms visited hospitals, and some of them died.

Later that evening, a grisly video emerged showing a mangled pile of at least 30 bodies strewn on the lower floor of an apartment building, bearing no sign of physical injury but many of them with foam around their mouths.

The look of the bodies "is pretty much consistent with a nerve-agent-type exposure", said Dr Alastair W.M. Hay, a professor of toxicology at Leeds University who has been studying the human impact of chemical weapons since Saddam Hussein's gas attack on Iraqi Kurds in the town of Halabja in 1989.

"That's suggestive of something that was very toxic, and people have pretty much died where they were when they inhaled the agent. They've just dropped dead."

But with Russia and Syria having strenuously denied from the outset that any kind of chemical attack occurred, and with Russian troops now deployed in Douma, it is unclear how much of an independent forensic investigation into the cause of the deaths will be possible.

Russian troops entered the town on Monday under the terms of a surrender deal reached with the rebels the previous day.

Russia says its representatives already have searched the area and could find no evidence that chemical weapons were used.

Russian experts and members of the Syrian Red Crescent have visited the hospitals where the victims were treated, Russian officials say, and a video showed Russian troops arriving at the house where the bodies were found.

There they found "no trace of any use of chemical weapons", Russian Foreign Minister Sergei Lavrov told reporters on Tuesday.

Russia later vetoed a US-backed UN Security Council resolution that would have established a new inquiry into chemical weapons attacks in Syria, after its own proposal to establish an inquiry failed to secure enough support to be put to a vote.

The international Organisation for the Prohibition of Chemical Weapons (OPCW), meanwhile, said it had accepted an invitation from the Syrian government and is preparing a team to travel to Syria "soon".

Mr Mohamad Katoub of the Syrian American Medical Society, which supported medical facilities in Douma before the Russians entered, said he doubted whether any meaningful evidence would remain.

Local staffers are afraid to give testimony, he said.

"In the current situation," he said, an investigation "is too hard".

Many of the activists, medical staffers and rescue workers with information about the attacks have since scattered, with many leaving Douma on buses headed north to rebel-held territory under the terms of the surrender deal reached on Sunday between the rebels and Russians.

Among them was Mr Marhoum, who spoke Tuesday from one of the buses.

Residents who are still there insist there was a chemical attack. But many say they are increasingly afraid to talk now that Russian troops are deployed in the town and with Syrian government forces expected to return after the evacuations are complete.

"The Russians have entered, and there are no guarantees for us not to be killed or detained," said a medical student who is hoping soon to leave and does not want to risk being arrested, and who spoke on the condition of anonymity.

"We're worried about being searched. We don't know what the regime and the Russians are preparing for us."

It remains unclear how many people died in the attack. The Syrian American Medical Society put the toll at 49. The White Helmets rescue group said 43 were killed and named 38 of them.

Twelve were children, and 19 shared one of two surnames, suggesting whole families died together.

There were reports of a chlorine bomb at around 4pm that day. But it was only after a second attack, at around 7.30pm, that there were indications that a more potent agent may have been used.

That was when the victims displaying unusual symptoms began showing up at Mr Marhoum's clinic, and when rescue workers and monitors say they suspect the bomb was dropped that killed the people sprawled in the apartment building.

The strongest evidence suggesting that chemicals were used in the attack comes from a few videos filmed in the aftermath of the event.

A video filmed by an activist, Mr Yasser al-Doumani, shows him pausing outside the building beside four sprawled corpses before descending concrete stairs into what appears to be a basement apartment.

There, a gruesome mangle of bodies is seen: babies, children, men and women lying in twisted distortions of death.

A child sprawled spread-eagle, half upside down, on the body of a woman. A girl in red died covering her face with her arms.

"It's just bodies piled up. That is so horrific," said Dr Hay, the Leeds professor, expressing shock as he watched the video online during a telephone interview on Tuesday. "There's a young child with foam at the nose and a boy with foam on its mouth. That's much, much more consistent with a nerve-agent-type exposure than chlorine."

Mr Doumani says in the video that he could smell chlorine, but chlorine doesn't usually kill so many people so quickly, Dr Hay said.

"Chlorine victims usually manage to get out to somewhere they can get treatment," he said. "Nerve agent kills pretty instantly."

If a nerve gas was indeed used, their deaths would have been agonising, said Dr Hay.

"It would be terrifying for those afflicted as they struggled to breathe, their chests failing to inflate properly and lungs filling with fluid," he said. "It would be an asphyxiation over some minutes."

The widespread reports of a chlorine odour coupled with symptoms not usually associated with the substance have given rise to speculation that a new kind of weapon was used that combined chlorine and a nerve agent such as sarin, which killed as many as 1,400 people in an attack in the Douma area in 2013.

Both gases are heavier than air and sink, making them especially deadly for people trapped in a confined space, such as those hiding from regular bombardment.

Such a mixture could potentially have been made, but it has not been seen before, and it would be "complicated and difficult to prepare", said Dr Hay.

He speculated that chlorine and sarin could have been dropped separately but at the same time, perhaps to confuse rescuers into identifying the deadly agent as chlorine.

The use of chlorine has not earned the same degree of international censure as attacks carried out with sarin and some other chemical agents.

The White House said this year that it suspected the Syrian government was experimenting with new forms of weapons, but there has been no independent confirmation.