WASHINGTON (WASHINGTON POST) - US President Donald Trump on Tuesday (May 29) accused prosecutors working on the investigation into Russian interference in the 2016 election of planning to meddle in this year's mid-term elections, escalating his attack on the probe while offering no evidence to back up his assertion.

In several morning tweets, Mr Trump attempted to cast himself as the victim of a partisan assault, part of a pattern of political deflection in recent days where the President has made false or exaggerated statements in defending his policies or attacking his perceived enemies.

Over the weekend, Mr Trump blamed Democrats for his policy of separating migrant families at the border, falsely said that the New York Times made up a source for a story on negotiations between the United States and North Korea, and continued to claim that the FBI's use of a source to interact with members of his 2016 election team was an attempt to spy on the campaign.

Mr Trump's unsupported assertion that prosecutors working for Special Counsel Robert Mueller will affect the mid-term elections to help Democrats was his latest effort to discredit the investigation, which is looking into Russian interference in the 2016 presidential election and possible coordination between Moscow and Mr Trump's campaign.

Republicans risk losing control of the House and possibly the Senate in this year's mid-terms as Democrats continue to feel emboldened by Mr Trump's unpopularity.

"The 13 Angry Democrats (plus people who worked 8 years for Obama) working on the rigged Russia Witch Hunt, will be MEDDLING with the midterm elections, especially now that Republicans (stay tough!) are taking the lead in Polls," Mr Trump wrote on Twitter, adding: "There was no Collusion, except by the Democrats!"

The probe, which recently marked its first anniversary, is headed by Mr Mueller, a longtime Republican, and overseen by Deputy Attorney General Rod Rosenstein, a Republican and a Trump appointee. 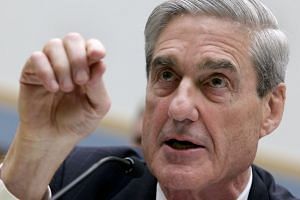 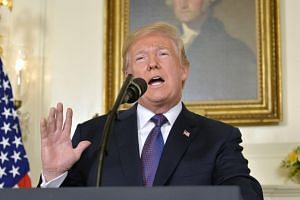 But publicly available voter-registration information shows that 13 of the 17 members of Mr Mueller's team have previously registered as Democrats, while four had no affiliation or their affiliation could not be found.

Justice Department policies prohibit discrimination in hiring for career positions on the basis of politics.

In a second tweet on Tuesday, Mr Trump said the special counsel's team should instead be investigating the campaign of his Democratic opponent in the 2016 election, whom he described as "totally Crooked Hillary Clinton".

"Why aren't the 13 Angry and heavily conflicted Democrats investigating the totally Crooked Campaign of totally Crooked Hillary Clinton," Mr Trump wrote. "It's a Rigged Witch Hunt, that's why! Ask them if they enjoyed her after election celebration!"

During the campaign, Mr Trump claimed she should have been prosecuted harshly for lax security in her government e-mail practices when she was secretary of state.

His campaign rallies frequently began with chants of "lock her up".

Mr Trump is now claiming that the FBI went easy on Mrs Clinton and that some people involved in making that decision are working against him in the Mueller probe.

When polls suggested that he would lose to Mrs Clinton in 2016, Mr Trump cast doubt on the validity of the election process and said at one point that he might not respect the outcome unless he won.

In another tweet on Tuesday, Mr Trump suggested that the Russia probe was taking away some of his focus on other issues confronting the country, including trade deals and the effort to denuclearise North Korea.

"Sorry, I've got to start focusing my energy on North Korea Nuclear, bad Trade Deals, VA Choice, the Economy, rebuilding the Military, and so much more, and not on the Rigged Russia Witch Hunt that should be investigating Clinton/Russia/FBI/Justice/Obama/Comey/Lynch etc." the President wrote.

Mr Trump has at some point attacked each person or organisation on his slashmarked list.

In the case of the FBI and Justice Department, that has meant assailing the credibility of elements of the federal government that are part of the Mueller effort.

White House press secretary Sarah Huckabee Sanders was asked on Tuesday whether Mr Trump is trying to discredit the Mueller probe by calling it a "witch hunt".

"I think the President is stating a fact," Ms Sanders replied.

"It is a witch hunt," she told reporters travelling with Mr Trump to a campaign rally in Nashville.

"He knows exactly what he did and what he didn't do, and he's been very clear from day one that there was no collusion."

US intelligence agencies have said they have high confidence that Russia attempted to interfere in the 2016 election to hurt Mrs Clinton.

By default, that effort would have helped Mr Trump, but Mr Mueller is looking into whether Trump associates played a more an active role.

Russia denies it interfered in the election.

Among those pushing back against Mr Trump's assertions on Tuesday was Senate Minority Leader Chuck Schumer, a New York Democrat, who noted the growing list of indictments and guilty pleas in the Mueller probe.

"Mueller's work is that of a career prosecutor and law enforcement officer who is squarely focused on getting to bottom of Russia's meddling in our elections and any possible collusion with your campaign and a hostile foreign government," Mr Schumer wrote in a tweet directed at Mr Trump.

Mr Trump's lawyer, Mr Rudy Giuliani, said on Tuesday that the President is attacking the Mueller probe because the tactic is working.

"As an effective politician, you're not going to do something that you don't think is working," Mr Giuliani said.

Mr Trump has taken to calling the FBI's interactions with an informant during the 2016 campaign "spygate" and has suggested without evidence that the FBI planted a mole in his campaign.

"Spygate - that's the reason - he's not just ratcheted it up for no reason," Mr Giuliani said.

"He believes it is working, and he is genuinely upset about it."

From what is known about the FBI effort, it arose from concerns about Russian hacking of Democrats in summer 2016.

There is no evidence that the informant, former University of Cambridge professor Stefan Halper, was inserted into the campaign, but he did seek out and meet several Trump campaign advisers.

Mr Trump will not agree to an interview with the special counsel until prosecutors allow the President's legal team to review documents related to the FBI's use of the informant, Mr Giuliani said Tuesday.

"We need all the documents before we can decide whether we are going to do an interview," Mr Giuliani said in an interview with The Washington Post, using Mr Trump's term "spygate" to refer to the FBI actions, which former officials have said were well within bounds.

Mr Giuliani has previously said that Mr Trump has done nothing improper and is eager to talk to Mr Mueller.

On Tuesday, though, he said he does not want to make a call on whether Mr Trump will sit down for an interview "until they decide whether they are going to give us the documents or not".

Under pressure from the White House and congressional Republicans, the Justice Department last week held an unusual pair of briefings for lawmakers on the FBI's use of the informant.

Mr Giuliani said on Tuesday that Mr Mueller's attempts to interview Mr Trump indicated that his probe of possible coordination between Russia and the campaign are nearing its end.

"I don't think they would have asked to interview him until they are pretty much finished with everything," Mr Giuliani said.

"They're only going to get one shot at him. They know that. You look pretty amateurish if you interview him and you don't have all the facts gathered."