WASHINGTON (AFP) - Special counsels like the one named to oversee the probe into Russia's alleged election interference are rare super sleuths with more power and independence than regular American investigators.

This time it is Robert Mueller, a former FBI director who took over the high-stakes Russia probe in May after US President Donald Trump fired James Comey as FBI director.

The first indictments in Mueller's probe are reported to have been brought by a grand jury and could be made public as early as Monday (Oct 30).

He is empowered to pursue not only Russian interference but any other crimes his large team of prosecutors should uncover.

Unlike a US attorney, a special counsel has more leeway in carrying out a probe.

They are appointed when an investigation by a US attorney would present a conflict of interest or when, "under the circumstances, it would be in the public interest to appoint an outside Special Counsel to assume responsibility for the matter," says the relevant law.

For instance in 1999, Attorney General Janet Reno appointed Senator John Danforth to oversee a probe into the role of the FBI in a deadly assault in 1993 against the Branch Davidian sect in Waco, Texas - an assault that Reno had ordered. 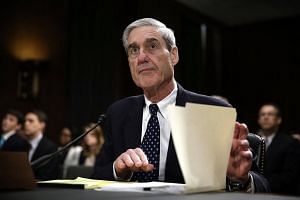 A special counsel does not have to keep his or her superiors briefed on each step of the probe they are carrying out - even though the counsel does still answer to the Justice Department and thus, ultimately, to the president.

The attorney general or his or her deputy does not have to explain the criteria used in choosing someone to be a special counsel, who can even come from outside government.

That is the case with Mueller, who resigned from the law firm where he worked to take on this investigation.

Mueller was named by deputy attorney general Rod Rosenstein, to whom he reports. Attorney General Jeff Sessions has recused himself from the Russia probe because he failed to state during his confirmation hearings that he had met with Russian officials.

A special counsel can issue subpoenas and ask for extra resources for a probe but must warn the attorney general or the deputy of important moves they plan to make in the investigation.

The attorney general can oppose a procedural act that the special counsel wants to make. And he or she can dismiss the counsel if that individual appears to have made a serious mistake or is in a situation of conflict of interest.

One of the best known special prosecutors was Archibald Cox, named to lead the Watergate investigation that led to Richard Nixon's resignation in 1974.

Nixon wanted Cox fired after he issued subpoenas for copies of taped conversations Nixon made in the Oval Office.

Attorney General Elliot Richardson refused to fire Cox, and resigned. His deputy William Ruckelshaus did the same in what came to be known as the "Saturday Night Massacre."