WASHINGTON (REUTERS) - President Donald Trump said on Monday (Oct 1) he wants the FBI to conduct a comprehensive and quick investigation into sexual misconduct allegations against his US Supreme Court nominee Brett Kavanaugh, but said he did not want to see a "witch hunt".

Trump, speaking three days after he ordered the investigation, said the FBI probe would be guided by what Senate Republicans want examined.

Trump ordered the FBI to carry out an investigation, lasting up to a week, of the allegations against Kavanaugh after Senate Republican leaders were pressed by moderate senators in Trump's own party.

"With that being said, I'd like it to go quickly."

Trump expressed sympathy and support for his nominee, a conservative federal appeals court judge whose confirmation prospects in the Senate looked smooth until the sexual misconduct allegations surfaced last month.

Christine Blasey Ford, a university professor from California, testified before the Senate Judiciary Committee last Thursday that Kavanaugh sexually assaulted her in 1982 when they were both high school students in Maryland. 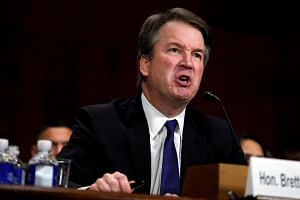 Kavanaugh denied her allegation, as well as accusations made by two other women, and accused Democrats of making him the victim of a political "hit."

"I think the FBI should do what they have to do to get to the answer," Trump told reporters at the White House.

"I think the FBI should interview anybody that they want, within reason," Trump added, including all three accusers as well as Kavanaugh himself.

"We don't want to go on a witch hunt, do we?" Trump asked, mentioning a term he has used in the past to denigrate Special Counsel Robert Mueller's investigation of Russia's role in the 2016 US presidential election.

Trump said the parameters of the investigation would be up to the Republican-led Senate.

"I'm guided by the Senate. I want to make the Senate happy, because ultimately they're making the judgment," Trump said.

Questions about the scope of the FBI investigation emerged over the weekend amid reports that Senate Republicans were working with the White House to contain the number of witnesses and the allegations to be investigated.

A White House official, speaking on condition of anonymity, told Reuters on Sunday the investigation would start off with interviews with only four people.

Democrats expressed concern about any curtailment of the probe, which comes after the Judiciary Committee approved Kavanaugh's nomination along party lines on Friday before the matter goes to the full Senate for a final vote.

"It has to be well beyond the initial very narrow scope of four witnesses, four individuals being interviewed," Democratic Senator Chris Coons, who sits on the Judiciary Committee, said on Monday.

Trump on Monday called Kavanaugh a good man who has been treated unfairly. Trump also said he believes Kavanaugh did not lie during his testimony to the Judiciary Committee about the extent of his drinking in high school and college.

On the other hand, Trump said, if the FBI uncovers something, "I'll take that into consideration. I have a very open mind." Trump did not elaborate.

Supreme Court nominations require Senate confirmation. Trump's fellow Republicans control the Senate by a narrow 51-49 margin. That means that if all the Democrats vote against Kavanaugh, Trump could not afford to have more than one Republican senator oppose his nominee, with Vice President Mike Pence casting a tie-breaking vote in the Senate.

Senator Jeff Flake, backed by fellow moderate Republicans Susan Collins and Lisa Murkowski, asked for the FBI investigation. Democrats previously had demanded an FBI probe, but Trump and other Republicans had opposed the move.