WASHINGTON (REUTERS) - United States President Donald Trump told governors at the White House on Sunday (Feb 24) that he is happy so long as North Korea continues its pause in weapons testing.

Mr Trump also said he saw eye to eye with North Korean leader Kim Jong Un, with whom he is scheduled to hold talks this week in Vietnam.

The two leaders will meet in Hanoi on Wednesday and Thursday, eight months after their historic summit in Singapore, the first between a sitting US president and a North Korean leader, where they pledged to work toward the complete denuclearisation of the Korean peninsula.

But their vaguely worded agreement has produced few results and US Democratic senators and security officials have warned Mr Trump against cutting a deal that would do little to curb North Korea’s nuclear ambitions.

“I’m not in a rush. I don’t want to rush anybody,” Mr Trump said. “I just don’t want testing. As long as there’s no testing, we’re happy.”

The Trump administration has pressed the North to give up its nuclear weapons programme, which combined with its missile capabilities, pose a threat to the United States, before it can expect any concessions.

But in recent days, Mr Trump has signalled a possible softening, saying he would love to be able to remove sanctions if there is meaningful progress on denuclearisation.

The US administration appears to be open to seeking a limited deal at this week's summit with Mr Kim, an approach that may yield small but potentially significant results. 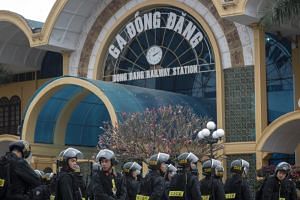 It is unclear how far either side is willing to go, but officials in Washington and Seoul say discussions have included allowing inspectors to observe the dismantlement of North Korea's Yongbyon nuclear reactor and opening US-North Korea liaison offices.

Declaring an end to a technical state of hostilities that has existed since the 1950s, and allowing some inter-Korean projects like opening a tourism zone in North Korea are other possibilities.

"Over the last few months, the US position has shifted considerably, putting in play a range of incentives that had been considered out of bounds, even by previous administrations," said Mr Adam Mount, defence analyst at the Federation of American Scientists.

Mr Kim pledged in a first summit with Mr Trump in Singapore in June to work towards denuclearisation of the Korean peninsula and the two sides agreed that mutual confidence building steps could promote that. But it soon became clear that the two sides had different idea of what they meant by denuclearisation.

Follow-up talks quickly ran into trouble over US demands for North Korea's complete, verifiable and irreversible denuclearisation, which Pyongyang denounced as unilateral and "gangster like."

Mr Trump, keen to present his unprecedented engagement with North Korea as a success, now says complete denuclearisation remains the "ultimate" goal, but there is no hurry for this, provided a freeze in weapons testing that has lasted since 2017 remains in place.

Mr Trump has also held out the prospect of easing punishing sanctions on the country, a pressing North Korean demand, if it does "something that's meaningful" on denuclearisation.