WASHINGTON (AFP) - The United States expressed concerns on Wednesday (Aug 14) over Chinese security force movements on the border with Hong Kong and urged Beijing to honour the territory's autonomy as pro-democracy protests continued.

A day after President Donald Trump appeared to take a hands-off position on the protests, a State Department spokesperson voiced concerns about the "continued erosion" of Hong Kong's autonomy and expressed "staunch" support for freedom of expression and peaceful assembly in the territory.

And senior members of Congress declared their backing for the protesters, blaming Beijing for a violent crackdown by the Hong Kong government.

"The United States is deeply concerned by reports of Chinese paramilitary movement along the Hong Kong border," the spokesman, who would not be named, told AFP in a statement.

"The United States strongly urges Beijing to adhere to its commitments in the Sino-British Joint Declaration to allow Hong Kong to exercise a high degree of autonomy."

Top legislators, who normally have access to internal US government intelligence, were more directly critical of the Hong Kong government and Beijing.

"Millions of Hong Kongers protesting the Chinese Communist Party's encroachment know the truth about exactly who is responsible for 'inciting' chaos. The rest of the world knows too," he said. 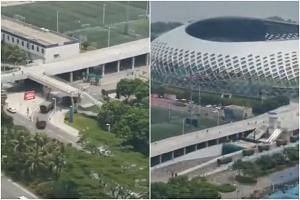 Nancy Pelosi the Democratic speaker of the House of Representatives, called the use of force "perpetrated against" the demonstrators "extremely alarming."

"The pro-Beijing Chief Executive and the Hong Kong police forces must immediately cease the aggression and abuse being perpetrated against their own people," she said in a statement.

The State Department spokesperson said the protests, which forced the partial closure of Hong Kong's international airport on Tuesday, reflect Hong Kong citizens' "broad and legitimate concerns" over the loss of autonomy, which was agreed in the deal between London and Beijing over returning the former British colony to China in 1997.

"We condemn violence and urge all sides to exercise restraint, but remain staunch in our support for freedom of expression and freedom of peaceful assembly in Hong Kong," the US official said.

The official also denied Chinese state-run media reports that the United States was stirring up the demonstrations behind the scene.

"We categorically reject the false charge of foreign forces as the black hand behind the protests," the official said.

Trump, who is locked in a tense showdown with Beijing over trade relations, has taken a milder approach to the Hong Kong protests, drawing criticism from US China experts and legislators.

Senator Chris Murphy, a Democrat, said Trump's silence was "devastating" to the protesters' cause.

Pelosi on Wednesday called on Trump to "walk away" from his statements, which she said "invite miscalculation."

"If America does not speak out for human rights in China because of commercial interests, we lose all moral authority to speak out elsewhere," she said.