WASHINGTON (NYTIMES, AFP) - United States President Donald Trump approved military strikes against Iran in retaliation for downing a US surveillance drone but pulled back from launching them on Thursday (June 20) night after a day of escalating tensions.

As late as 7pm on Thursday (7am on Friday, Singapore time), military and diplomatic officials were expecting a strike, after intense discussions and debate at the White House among the President's top national security officials and congressional leaders, according to multiple senior administration officials involved in or briefed on the deliberations.

Officials said the President had initially approved attacks on a handful of Iranian targets, like radar and missile batteries. But the action was abruptly called off for the evening.

It was not clear whether Mr Trump simply changed his mind or whether the administration altered course because of logistics or strategy.

It was also not clear whether the attacks might still go forward. The White House declined to comment, as did Pentagon officials.

The retaliation plan was intended as a response to the shooting down of the unmanned, US$130 million (S$176 million) surveillance drone, which was struck on Thursday morning by an Iranian surface-to-air missile, according to a senior administration official.

The strike was set to take place just before dawn on Friday in Iran to minimise risk to the Iranian military or to civilians. But military officials received word a short time later that the strike was off, at least temporarily. 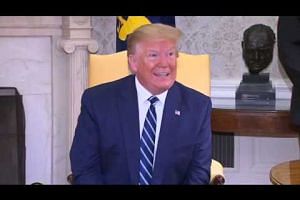 Trump plays down Iran's shooting of US surveillance drone

Senior administration officials said Secretary of State Mike Pompeo, national security adviser John Bolton and CIA director Gina Haspel had favoured a military response. But top Pentagon officials cautioned that such an action could result in a spiralling escalation, with risks for US forces in the region.

Congressional leaders were briefed by administration officials in the Situation Room.

On Thursday, Mr Trump insisted that the US' unmanned surveillance aircraft was flying over international waters when it was taken down by an Iranian missile.

"This drone was in international waters, clearly," the President told reporters on Thursday afternoon.

Iran's government insisted that the drone had strayed into Iranian airspace, releasing Global Positioning Satellite coordinates that put the drone 12.8km off the country's coast - inside the 12 nautical miles from the shore that Iran claims as its territorial waters.

On Friday, Iran said it had "indisputable" evidence that the drone had violated its airspace. Deputy Foreign Minister Abbas Araghchi told Swiss ambassador Markus Leitner, whose country represents US interests in Iran, of the evidence on Thursday night, the foreign ministry said in a statement.

"Even some parts of the drone's wreckage have been retrieved from Iran's territorial waters," Mr Araghchi told the Swiss envoy.

Mr Majid Takht-Ravanchi, Iran's ambassador to the United Nations, said Teheran "does not seek war" but "is determined to vigorously defend its land, sea and air".