WASHINGTON (BLOOMBERG) - President Donald Trump apologised to Justice Brett Kavanaugh for the bitter battle over his confirmation to the Supreme Court and declared him "innocent" of the sexual assault allegations that nearly derailed his nomination.

"On behalf of our nation, I want to apologise to Brett and the entire Kavanaugh family for the terrible pain you have been forced to endure," Mr Trump said on Monday (Oct 8) during a ceremonial swearing-in at the White House. "You, sir, under historic scrutiny, were proven innocent."

Justice Kavanaugh, acknowledging the "contentious and emotional" fight over his confirmation, said he had "no bitterness" and promised to "always be a team player on the team of nine".

Retired Justice Anthony Kennedy, whom Justice Kavanaugh once clerked for and whose place he has taken on the court, administered the oath of office.  Justice Kavanaugh will hear his first cases on Tuesday, when the court convenes at 10am (Tuesday, 10pm, Singapore time)

Justice Kavanaugh's installation cements the strongest conservative majority on the court since the New Deal, delivering on a decades-long ambition of the American right. It comes just in time to motivate evangelicals and social conservatives to turn out to vote in November elections that will determine control of Congress.

His ascent to the court was sealed by a 50-48 Senate vote last Saturday. Mr Trump has spent the past few days relishing Justice Kavanaugh's confirmation, which appeared in doubt as recently as last week after three women made sexual assault allegations against the nominee.

During a speech in Florida earlier on Monday, Mr Trump denounced the accusations against Justice Kavanaugh as "a hoax" perpetrated "by people that are evil". The president's rendering of a verdict on the sexual assault allegations risks further antagonising political opponents at a moment that the "Me Too" movement demands accountability for sexual misconduct. 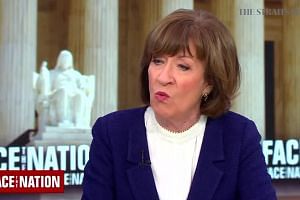 His attempt to frame his apology to Justice Kavanaugh as coming on behalf of the entire nation also overlooks public antipathy toward the nominee. Americans opposed his confirmation 51 per cent to 41 per cent, according to a CNN poll conducted from Oct 4 to 7.

More people believed California college professor Christine Blasey Ford, who accused the judge of trying to rape her when they were both high school students, and other women who accused him of misconduct than believed his denials, according to the CNN poll.

Fifty-two percent said they believed the women, versus 38 per cent who said found the judge most credible.

Protesters crowded hallways in the Capitol before his confirmation vote and pounded on the Supreme Court doors afterwards. Some Democrats have talked of impeaching the judge, though the process is difficult with a two-thirds Senate majority required to remove a federal judge.

Justice Kavanaugh will be closely scrutinised from his first day on the bench. The court will be hearing arguments in two previously little-noticed cases involving the Armed Career Criminal Act, a federal law that imposes heightened penalties on people who repeatedly commit serious crimes.

All eight of the Supreme Court's other justices attended the White House ceremony, a show of collegiality by members of an ideologically divided court. Justice Kavanaugh was joined at the ceremony by his wife and two daughters.

"On the Supreme Court, I will seek to be a force for civility and unity," he said.

Former president Barack Obama's two Supreme Court appointees, Justices Sonia Sotomayor and Elena Kagan, did not participate in oath ceremonies at the White House. They took their oaths at the court in ceremonies that were televised live.

In 2009, when Justice Sotomayor was sworn in, administration officials said Mr Obama wanted to forgo a White House oath as a sign of the new justice's independence. The president later hosted a reception at the White House for her, as he did a year later with Justice Kagan.