WASHINGTON (WASHINGTON POST) - The FBI has begun contacting people as part of an additional background investigation of Judge Brett Kavanaugh, including a second woman who alleges that the Supreme Court nominee sexually assaulted her, according to people familiar with the unfolding investigation.

The bureau has reached out to Deborah Ramirez, a Yale University classmate of Kavanaugh's who alleges that he shoved his genitals in her face at a party where she had been drinking and become disoriented.

It was not clear that agents had yet interviewed Ramirez. But the FBI is moving quickly to contact people as part of the new background investigation, which President Donald Trump ordered on Friday (Sept 28) under pressure from key members of his party.

The FBI also is following up on allegations by Christine Blasey Ford, a California psychologist, who testified to the Senate this week that Kavanaugh sexually assaulted her in the early 1980s when they were in high school in suburban Washington, DC.

Ford recounted in detail how Kavanaugh and his friend Mark Judge allegedly attacked her in a bedroom during a small gathering at a house when the teen boys were both drunk. Ford said the alleged attack had caused her lasting trauma, and she was visibly anguished as she recalled the events Thursday before the Senate Judiciary Committee.

Following Ford's testimony, Kavanaugh vigorously denied the allegations before the committee and accused Democrats of launching a last-minute attempt to derail his nomination. He decried the confirmation process as a "circus."

On Friday, Republicans on the committee voted to proceed to a full Senate vote on Kavanaugh's nomination, but a series of back-room negotiations led to a surprise twist in what has already been a wrenching confirmation process for a Supreme Court nominee, among the most polarising in recent memory.

Republican Senator Jeff Flake, a key swing vote to confirm Kavanaugh, said he would vote to proceed to a full Senate vote, but that the Senate vote should be preceded by a new, expanded FBI investigation of the allegations against Kavanaugh.

Recognising that Flake and a handful of other senators' votes appeared contingent upon the investigation, Republican leaders and the White House relented.

Later that day, Trump ordered the investigation and that it be limited in scope and completed by next Friday.

The Senate Judiciary Committee on Friday afternoon said the supplemental FBI investigation would be limited to "current credible allegations."

Committee spokesmen did not return a request for comment to elaborate on what specifically those allegations are.

Lawmakers and Trump administration officials had few expectations that the FBI would settle Ford and Kavanaugh's duelling accounts. A background investigation is, by its nature, more limited than a criminal probe, and FBI agents will not be able to obtain search warrants or issue subpoenas to compel testimony from potential witnesses.

The FBI's interviews, which will take a few days to conduct, won't turn into a sprawling inquest of everyone Kavanaugh went to a party with in high school, said a person familiar with the investigation.

But already, two potentially crucial witnesses have said they will cooperate with the FBI, raising the possibility that at least more statements and recollections will be added to the record, even if they're not ultimately definitive.

An attorney for Leland Keyser, a friend of Ford's who Ford says was at the party, said Keyser also was willing to cooperate with the FBI investigation. But the attorney emphasised that Keyser has no recollection of the party where Ford alleges Kavanaugh assaulted her.

"Notably, Ms Keyser does not refute Dr Ford's account, and she has already told the press that she believes Dr Ford's account," the attorney, Howard J. Walsh III, wrote in an email to the Senate Judiciary Committee.

"However, the simple and unchangeable truth is that she is unable to corroborate it because she has no recollection of the incident in question." 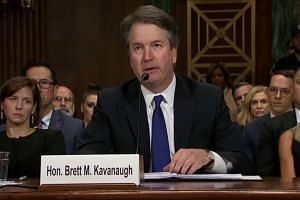 Judge, the high school friend of Kavanaugh who Ford says was in the room during the alleged assault, has also agreed to cooperate with the FBI. His account has been particularly sought after because, unlike Kavanaugh, Judge has not denied Ford's allegations but has said he has no memory that such an assault occurred.

Ford told the Judiciary Committee that some weeks after the alleged assault, she ran into Judge at a local grocery store where he was working for the summer.

"I said 'hello' to him," she said. "His face was white and very uncomfortable saying 'hello' back."

Ford continued, "He was just nervous and not really wanting to speak with me, and he looked a little bit ill."

In addition to Ford and Ramirez, another woman, Julie Swetnik, who said she knew Kavanaugh in high school, alleged in a sworn statement this week that Kavanaugh and Judge got teenage girls drunk at parties, where the girls were sexually assaulted, sometimes by groups of boys.

Swetnik claimed that she was raped by such a group at a party where Kavanaugh and Judge were present. She hasn't accused Kavanaugh of raping her. Swetnik described Kavanaugh as a "mean drunk" in high school who was physically and verbally aggressive with girls.

Kavanaugh has denied the accusations from Ramirez and Swetnik and has said emphatically that he never abused or assaulted anyone.

He has also pointed to half a dozen other background checks the FBI conducted on him for other federal positions over the years, none of which surfaced evidence or allegations of sexual assault.