WASHINGTON (AFP, BLOOMBERG) - Secretary of State Mike Pompeo told Saudi Crown Prince Mohammed bin Salman on Sunday (Nov 11) the US will hold accountable all those involved in the killing of a dissident Saudi journalist, in a telephone call that also took in the conflict in Yemen.

The killing of Mr Jamal Khashoggi in Saudi Arabia's consulate in Istanbul and the war in Yemen, which has pushed the country to the brink of famine, are two of the main sources of strain in the decades-old alliance between Washington and Riyadh.

Crown Prince Mohammed is controversially linked to both: he has played a direct role in overseeing Saudi Arabia's Yemen intervention and has also been accused of orchestrating the Oct 2 murder of Mr Khashoggi, who was a US resident.

"The Secretary emphasised that the United States will hold all of those involved in the killing of Jamal Khashoggi accountable, and that Saudi Arabia must do the same," State Department spokeswoman Heather Nauert said in a statement.

The top US diplomat has previously said Mr Khashoggi's killing "violates the norms of international law", and that the US was reviewing possible sanctions on individuals identified as having been involved.

But Mr Pompeo and US President Donald Trump have also both emphasised America's important commercial, strategic and national security relationships with the petro-state.

Upping the pressure on Saudi Arabia, President Recep Tayyip Erdogan said on Saturday that Turkey had shared recordings related to Mr Khashoggi's murder with Riyadh, Washington and other capitals, without giving details of their specific contents. 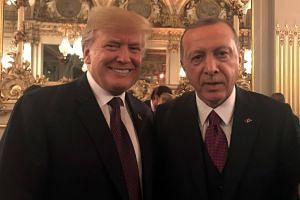 After repeated denials, Saudi Arabia finally admitted the 59-year-old journalist had been murdered at its diplomatic mission in what it termed a "rogue" operation.

Ankara has been demanding, to date without success, the extradition of those involved in the killing.

Mr Khashoggi, a columnist for the Washington Post, was critical of Crown Prince Mohammed and the country's intervention in Yemen, a conflict which also came up during the call, said Ms Nauert.

Mr Pompeo "reiterated the United States' calls for a cessation of hostilities and for all parties to come to the table to negotiate a peaceful solution to the conflict", she said.

Mr Pompeo has previously called for an end to the fighting in the impoverished Arab state, saying that Shi'ite Houthi rebels must stop missile and drone strikes from areas they control, and that the Saudi-led coalition must subsequently halt strikes in populated areas.

Mr Pompeo's latest remarks come just days after the announcement of the end of a controversial refuelling arrangement between the US and the Saudi-led coalition carrying out strikes in Yemen - a step that lessens American involvement in the war.

The end of the arrangement comes amid ongoing international outcry over Saudi actions in Yemen, particularly after a string of high-profile coalition strikes that have killed scores of civilians, many of them children.

The Pentagon had provided refuelling capabilities for about 20 per cent of coalition planes flying sorties over Yemen, supporting a highly controversial intervention led by Riyadh to bolster President Abedrabbo Mansour Hadi's government in the face of an insurgency by the Houthis - a conflict that has left nearly 10,000 people dead.

Meanwhile, Foreign Secretary Jeremy Hunt on Monday begins the first visit to Saudi Arabia by a British minister since the death of Mr Khashoggi.

Mr Hunt will use meetings with officials including King Salman and Crown Prince Mohammed to urge Saudi Arabia to cooperate with Turkey over the investigation into the murder, according to his office in London.

"It is clearly unacceptable that the full circumstances behind his murder still remain unclear," Mr Hunt said in a statement.

Mr Hunt, who's also visiting the United Arab Emirates this week, will call for an end to the bloodshed in Yemen, where a Saudi-led coalition is fighting Houthi rebels believed to be backed by Iran.

The United Nations has called the conflict the world's worst humanitarian disaster, but UN Security Council members are divided over how hard to pressure Saudi Arabia over its role.

"We are witnessing a man-made humanitarian catastrophe on our watch: now is the window to make a difference, and to get behind both the UN peace process and current UK efforts in the Security Council," Mr Hunt said.

The visit comes as Prime Minister Theresa May uses her annual foreign policy speech to outline the action taken against Russia following the nerve agent attack on a former spy in southern England in March.

"We remain open to a different relationship - one where Russia desists from these attacks that undermine international treaties and international security - and instead acts together with us to fulfil the common responsibilities we share as permanent members of the UN Security Council," Mrs May will tell the Lord Mayor's Banquet in London on Monday, according to her office.

"And we hope that the Russian state chooses to take this path. If it does, we will respond in kind."