Mr Mattis, speaking on Saturday (Oct 27) to an international security conference in Bahrain's capital, Manama, never mentioned Saudi Arabia directly in connection with the Oct 2 killing of Mr Khashoggi, a Virginia resident who was a columnist for The Washington Post, at the Saudi Consulate in Istanbul.

But he said that US Secretary of State Mike Pompeo had revoked the visas of Saudis suspected in the killing and that President Donald Trump had vowed "to get to the bottom of it" and get Congress involved.

His remarks reflected not only the gravity of the situation, but also the administration's continuing struggle to defend the value of its alliance with Saudi Arabia as it pressed the Saudi government for answers.

"Failure of any one nation to adhere to international norms and the rule of law undermines regional stability at a time when it is needed most," Mr Mattis said.

Moments later, in comments to several hundred diplomats, military officers and business leaders, Mr Jubeir said an inquiry into Mr Khashoggi's death would take time and denounced what he described as "media hysteria" over the killing. 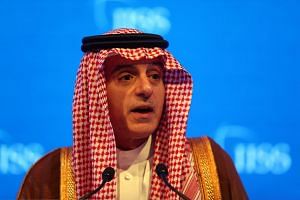 This past week, Mr Trump condemned Saudi Arabia's shifting account of the killing of Mr Khashoggi as "the worst cover-up ever".

And Saudi Arabia's public prosecutor acknowledged for the first time that Mr Khashoggi's killing appeared to have been premeditated, and not an accident.

But the president has focused his ire on Saudi operatives rather than decision-makers like Crown Prince Mohammed bin Salman.

Even before Mr Khashoggi's disappearance, relations between Washington and Riyadh had been on edge. This month, Mr Trump said King Salman might not last two weeks without the US, escalating pressure on the Saudis to curb rising oil prices and to pay for military protection.

"How about our military deals where we protect rich nations that we don't get reimbursed?" Mr Trump said at a campaign rally in Mississippi on Oct 2. "I love the king, King Salman, but I said: 'King, we're protecting you. You might not be there for two weeks without us. You have to pay for your military, you have to pay.'"

Mr Trump did not elaborate on the conversation. But he appeared to be referring to a phone call he had days earlier with King Salman.

In his remarks in Bahrain, home to the Navy's 5th Fleet, Mr Mattis sought to tamp down increasing concerns that if Washington reduces its security role in the Middle East, Russia would move quickly to fill the vacuum.

The US has not had an aircraft carrier in the Persian Gulf since March, and the Pentagon is pulling Patriot missile-defence systems out of Jordan, Kuwait and Bahrain as part of a strategic realignment of firepower away from the Middle East and towards Russia and China.

"Russia's presence in the region cannot replace the longstanding, enduring and transparent US commitment to the Middle East," Mr Mattis said.

Indeed, the bulk of Mr Mattis' speech focused on what he said was Iran's destabilising actions in Iraq, Syria, Yemen and Lebanon - "spreading mischief and murder across the region", as the secretary put it.

The speech was likely to be well received in some quarters.

"It was what Saudi Arabia and its allies wanted, and are delighted to hear: A reaffirmation of America's commitment to the region, to its partners and of course to a blanket hostility toward Iran and all Iran does," said Mr Robert Malley, president of the International Crisis Group and a former White House coordinator for the Middle East, North Africa and the Gulf during the Obama administration.

When Mr Mattis served as the four-star general and leader of the military's Central Command during the Obama administration, he blamed Iran for deadly attacks by Shi'ite militias in Iraq. He advocated confronting Iran, a position that put him at odds with President Barack Obama, who was trying to engage Iran diplomatically.

In the Trump administration, however, Mr Mattis has taken a more moderate line. He joined Mr Rex Tillerson, then Secretary of State, in trying to persuade Mr Trump not to leave the nuclear deal with Iran and has used more measured language.

On Saturday, though, Mr Mattis' critique of Iranian activities in the region echoed the administration's increasingly confrontational stance towards the government in Teheran, from its support of Syrian President Bashar Assad to Iran's "destructive and costly cyber attacks against sovereign nations".

Mr Mattis also called for an end to the conflict in Yemen that pits Iranian-aligned Houthi rebels against Yemeni forces backed by Saudi Arabia and the United Arab Emirates, and urged support for a United Nations-led diplomatic effort.

"The tragedy of Yemen worsens by the day," Mr Mattis said. "Now is the time to move forward on stopping this war."

Amid the international condemnation of Mr Khashoggi's killing, there is growing pressure in Congress to cut off US assistance to the Saudi-led air campaign in Yemen, including aerial refuelling of Saudi fighter jets and intelligence.

Saudi Arabia, the United Arab Emirates, Bahrain and Egypt all cut off travel and trade ties with Qatar in June 2017, accusing it of backing their arch-rival, Iran, and of supporting terrorism. Qatar denies the charges and says the boycott impinges on its sovereignty.

The US has tried, without success, to mediate the dispute. It is an ally of the six-nation Gulf Cooperation Council (GCC), and Qatar is home to a major US air base.

"The solving of internal debates among our GCC partners is vital," Mr Mattis said.