MIAMI (AFP) - A feature that helps aircraft slow down on landing was broken on a Boeing 737 that skidded into a river in Florida, a top transportation safety official said on Sunday (May 5).

The plane carrying 143 people slid off the runway after a hard landing last Saturday at a naval air station in Jacksonville during a lightning storm.

Police said 21 people were taken to hospital with minor injuries, but no fatalities or critical injuries were reported.

Transport safety officials said one of the thrust reversers, which are supposed to help to slow the aircraft down, was not working.

"The aircraft had been in maintenance and the maintenance log noted that the left-hand thrust reverser was inoperative," Mr Bruce Landsberg, vice-chairman of the National Transportation Safety Board, told reporters on Sunday.

He said investigators would be examining the maintenance of the aircraft in the weeks prior to the accident "and the condition of the thrust reversers will obviously be of interest".

The pilot also requested a change of runway, landing on one air traffic control advised had naval equipment on it, reducing the available runway length by 365m, Mr Landsberg said. 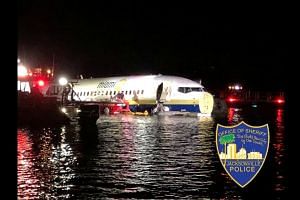 Probe begins after Boeing 737 slides off runway into Florida river

"We don't know what they were thinking or why they made that choice. That will be one of the things we look to find out, as we go through the cockpit voice recorder," he said.

The flight data recorder had been recovered, but the cockpit voice recorder remained underwater in the tail of the aircraft.

"When we recover it, (it) will give us much more information on what the crew was thinking," he said.

Thunderstorms and lightning have been hampering efforts to retrieve the plane fuselage.

The navy had arranged for divers to recover several pets which are believed to have drowned in the cargo hold, he said.

Booms had also been set up to contain jet fuel spilling into the St Johns River.

Passengers on the flight from the US base at Guantanamo Bay in Cuba to Jacksonville included military personnel and family members.

Passengers clambered across the wings of the partially submerged plane before being transported to shore in inflatable boats.

"We couldn't tell where we were, a river or an ocean. There was rain coming down. There was lightning and thunder. We stood on that wing for a significant period of time," Ms Cheryl Bormann, a defence attorney who was on board the flight, told CNN.

The plane involved was a Boeing 737-800, in operation for 18 years, according to the FlightRadar24 website.

US aerospace giant Boeing is under scrutiny following two crashes that killed a total of 346 passengers and crew and grounded its newer 737 Max planes worldwide.

Both a Lion Air crash in Indonesia in October and March's Ethiopian Airlines crash outside Addis Ababa occurred shortly after takeoff.