BOSTON (AP) - The online message board 8chan was effectively knocked offline Monday (Aug 5) after two companies cut off vital technical services following the mass shooting in El Paso, Texas , whose perpetrator was linked to the site.

8chan is known for trafficking in anonymous hate speech and incitement of hate crimes.

A racist "manifesto" posted to the site is believed to have been written by the suspect in a Saturday's killing of 22 people in El Paso, Texas.

If it was, it would be the third known instance of a shooter posting to the site before going on a rampage, following mass shootings at two New Zealand mosques in the spring, and another at a California synagogue.

Late Sunday, the security company Cloudflare announced it was cutting off the message board, which has a history of use by violent extremists, for being "a cesspool of hate."

Gab is where the man accused of massacring 11 people last October in a Pittsburgh synagogue posted anti-Semitic vitriol. Epik also owns the security company BitMitigate, whose clients include the Daily Stormer, a neo-Nazi and white supremacist site. 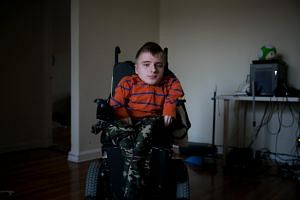 Like Cloudflare, BitMitigate protects web sites from denial-of-service attacks that can make them unreachable - the kind of online armour that contentious message boards require to survive.

But on Monday, London-based Voxility, a provider of network hardware and services, upended both Epik and BitMitigate by terminating its contract with the companies, said Ms Maria Sirbu, the company's vice-president of business development.

"We have made the connection that at least two or three of the latest mass shooting in the US were connected with these guys," Ms Sirbu said. "At some point, somebody needed to make the decision on where the limit is between what is illegal and what is freedom of speech and today it had to be us."

In the absence of regulation, it falls on Internet services companies in the United States to ban online speech deemed unacceptable.

Neither 8chan nor Daily Stormer were reachable on Monday afternoon, when the person identifying themselves as 8chan's administrator tweeted that "strategies are being developed to bring services back online."

Two weeks ago, Voxility informed the Daily Stormer that it was in violation of the company's abuse policies and then cut off its service for a day, said Ms Sirbu, who said her company has 20 data centres worldwide and operates in 80 countries.

Service was restored after the objectionable content was removed. But it became clear to Voxility after the El Paso shooting "that these guys were not going to stop," Ms Sirbu said. "We will not renew services for these guys and will ensure that they don't return to Voxility under false names."

Neither 8chan nor Epik.com representatives could immediately be reached for comment despite attempts via email and LinkedIn.

On Sunday, Cloudflare CEO Matthew Prince wrote in a blog post that the suspect in El Paso "appears to have been inspired" by discussions on 8chan.

He said a suspect in an earlier shooting at a synagogue in Poway, California, also posted a "hate-filled 'open letter"' on 8chan, as did the mosque attacker in Christchurch, New Zealand.

"8chan has repeatedly proven itself to be a cesspool of hate," wrote Mr Prince. "They have proven themselves to be lawless and that lawlessness has caused multiple tragic deaths."

With the big social networks doing a better job of moderating hate speech, incitement to violence and harassment, extreme speech is gravitating to smaller websites that are often little more than message boards - sites teenagers routinely make in their bedrooms, said Ms Joan Donovan, the director of the technology and social change project at Harvard University's Kennedy School of Government.

Services like Cloudflare or BitMitigate are necessary to keep extremist-tolerant message boards like 8chan online because they typically attract hostile traffic from hacktivists aimed at overwhelming the sites and making them unreachable.

But without them, it's difficult for any site of consequence to survive.

We're not going to get rid of message boards," said Ms Donovan. "But we stifle the spread and the impact of these manifestos by refusing to let them elevate to the level of mainstream media."

Two years ago, Cloudflare terminated service to the Daily Stormer, which on Sunday Mr Prince lamented as "still available and still disgusting." "They have bragged that they have more readers than ever," he said. "They are no longer Cloudflare's problem, but they remain the Internet's problem."

In the absence of laws regulating hate speech and incitement to violence online, Ms Donovan said, it's going to be up to local jurisdictions - and Internet service companies- to crack down on forums.

Otherwise, people such as Epik.com CEO Robert Monster of Bellevue, can continue to support them.

In November, Monster defended in a blog post his company's decision to host Gab.com after its previous domain host, GoDaddy, dropped it.