WASHINGTON (REUTERS, NYTIMES) - US President Donald Trump, often accused of denigrating non-white people, said on Saturday (Aug 11) that he condemned racism as the nation marked the anniversary of deadly unrest triggered by a neo-Nazi rally in Charlottesville, Virginia.

That protest left one person dead and highlighted the growing boldness of the far right under Trump.

Another far-right rally is scheduled for Sunday, right outside the White House.

Trump drew scorn after the Charlottesville violence for initially avoiding any condemnation of the torch-bearing white nationalists who took part in that rally.

Last year in Charlottesville, neo-Nazis, Ku Klux Klansmen and other members of hate groups marched through the University of Virginia campus shouting anti-Semitic slogans, then fought with counterprotesters in the city streets.

A man who espoused neo-Nazi views drove his vehicle into the counterdemonstrators, killing a 32-year-old woman, Heather Heyer. The ugly episode aggravated the country’s frayed racial dynamic – even more so after Trump equated the counterprotesters with the white supremacists by blaming “many sides” for the violence.

The chance of that kind of spontaneous mayhem has led to weeks of planning between Washington’s law enforcement agencies, which have developed proposals to guard marches leading to the rally and the rally itself, as well as deal with any confrontations that precede or follow it in the streets of Washington.

Sgt. James Dingeldein of the Park Police said his agency, the Washington police and the Park Service had met with leaders of counterprotest groups to explain to them what is permissible on the grounds of the park.

The Park Service has issued a detailed set of limits and prohibitions on items that can be brought in, banning some of the items that were wielded in Charlottesville.

“If there is potential for violence, it will be dealt with quickly,” Dingeldein said.

“We must come together as a nation. I condemn all types of racism and acts of violence. Peace to ALL Americans!”

https://twitter.com/realDonaldTrump/status/1028271447632957441
Charlottesville steps up security on a tense weekend
Cameraman recalls Charlottesville, one year on

They had gathered to protest efforts to remove statues of Confederate leaders, including one of the Confederacy’s top general, Robert E Lee.

When the demonstrations continued on Aug 12, fighting broke out between neo-Nazi supporters and anti-fascists from a black-clad group called Antifa.

'BLAME ON BOTH SIDES'

The violence culminated with a man driving a car into a crowd of counter-protesters, killing a woman and injuring 19 people.

In the immediate aftermath, Trump drew broad criticism when he initially appeared to establish a moral equivalence between the two groups of protesters and refused to criticise the far rightwingers.

He did eventually yield to immense political pressure and condemn white nationalism.

But just a day later, Trump said there was “blame on both sides” for the violence in Virginia, condemning the anti-fascists who came “with clubs in their hands.” 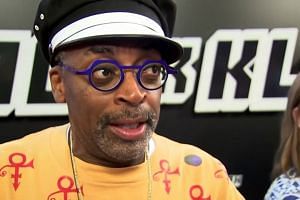 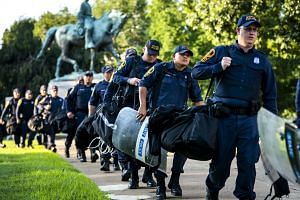 “I think there’s blame on both sides,” Trump said. “But you also had people that were very fine people, on both sides.”

Trump is constantly fending off charges that he is misogynist and racist. He denies the allegations.

Trump has retweeted white nationalist material; said Mexicans crossing the US border are rapists and drug dealers; once referred to a Hispanic Miss Universe as “Miss Housekeeping,” and employed Steve Bannon, central figure of the new “alt-right” in America, as his campaign chief and top strategist for a time.

In one of the most recent race-related flare-ups, a black former White House employee, Omarosa Manigault Newman, has written in an upcoming memoir that Trump was caught on mic uttering the N-word “multiple times” during the making of his hit reality TV show The Apprentice prior to his presidential run, and that there are tapes to prove it.

Manigault Newman is a former Apprentice star. She served as director of communications for the White House office of public liaison until she was fired in December.

While she does not write that she herself heard Trump use the taboo language, she cites three unnamed sources, and adds that she experienced “truly appalling things” with Trump, according to The Guardian, which obtained a copy of the book ahead of its publication next week.

The White House dismissed the book as riddled with lies and false accusations and the product of a “disgruntled former White House employee.”