WASHINGTON - A white supremacist "Unite the Right" rally in front of the White House on Sunday (Aug 12) afternoon, will be watched for signals whether the movement has lost or gained any traction since a deadly protest exactly a year ago at Charlottesville.

Hundreds of counter-demonstrators are also expected to show up, with at least three different groups rallying at separate sites.

Police have said they will keep them apart, unlike in Charlottesville on Aug 12 last year when both sides clashed violently, leaving 32-year-old Heather Heyer, a local woman, dead after a neo-Nazi youth rammed his car into a crowd.

Sunday's rally comes as the debate over the separation of illegal immigrants and their children at the border rumbles on - one of several factors fuelling America's toxic political polarisation. The Donald Trump administration wants to end "chain migration" - in which new citizens can sponsor immediate relatives - and end support for "sanctuary cities" that welcome immigrants.

Fox News host Laura Ingraham this week triggered a furious backlash from liberals when she said on her show, watched by some 3 million viewers, that "the America we know and love doesn't exist any more".

"Massive demographic changes have been foisted on the American people, and they are changes that none of us ever voted for, and most of us don't like," she said, adding, "much of this is related to both illegal and, in some cases, legal immigration that, of course, progressives love".

Later, she rejected accusations of racism and disavowed praise from Mr David Duke, former leader of the white supremacy group Ku Klux Klan. "One of the most important (truthful) monologues in the history of MSM," Mr Duke wrote in a tweet which he later deleted. MSM is the "mainstream media", regularly derided by Fox News hosts and Trump supporters at rallies and across social media.

While white people are currently still a majority, the reality feeding what analysts call "white anxiety", is the prediction by several studies and the Census Bureau, that no single racial group in the United States will be a majority by 2044. 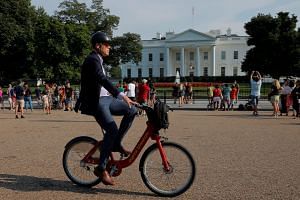 "Many white supporters of President Trump will view this population development as yet another sign of the end of the America they know, as the country inches toward majority-nonwhite status," Dr William H. Frey, senior fellow at the Brookings Institute, wrote on Aug 3.

"To them, this means relinquishing dominance and privileged status to browner and newer Americans, who they perceive as competing with them for jobs and government resources, while distorting their way of life."

"This...fuelled the appalling actions in Charlottesville that resulted in the death of Ms Heyer and underlies many proposals from (President Donald) Trump, such as the Mexican border wall and Muslim ban, along with his derogatory statements against immigrants...to display a pushback against demographic change."

Several leaders and public faces from the Charlottesville rally came away discredited."I think Unite the Right was too tainted by the violence of last year to have any traction, except among the hardest-core of rightist rabble rousers," Professor H.W. Brandsof Texas University at Austin's history department, told The Straits Times. "But we'll see," he added.

A right-wing Patriot Prayer rally in Portland, Oregon last weekend turned chaotic as hundreds of counter-protesters also gathered. At least one person was injured and several were arrested.

Guns - which were evident in Charlottesville last year - have been banned from this Sunday's rallies in the capital. Chief Robert MacLean of the US Park Police, the agency that grants permits to rally, told WTOP on Friday : "Crowd management is one of those things that we deal with quite frequently here in Washington, DC, and we're adept in being flexible and using our discretion."

But violence or destruction of property would not be tolerated, he warned.