WASHINGTON (NYTIMES) - As he waited on Tuesday morning (March 12) to board Southwest Flight 2315 from Oakland, California, to Los Angeles, Mr William Gonzales learned that the plane that he was about to board was a Boeing 737 Max 8.

"This is the Max?" Mr Gonzales asked, his eyes widening. "I'm not getting on that plane if it's the Max."

The model, which was involved in a second fatal crash within five months on Sunday, had by Tuesday been banned from the national airspace of China, Australia and countries in the European Union. At least 34 airlines around the world have grounded their planes.

But US and Canadian carriers that fly it - Southwest, American Airlines and Air Canada, and United, which flies the Max 9 - all said they would continue to use the plane as scheduled.

After scrolling through his phone to look up the plane model, which turned out to be a Max 8, Mr Gonzales said he would take a later flight.

"There are enough flights going to LA, and I can miss a meeting," he said.

But Mr Gonzales seemed to be the exception - onboard the flight there was anything but alarm, and disarray and disruption seemed to be minimal at airports. 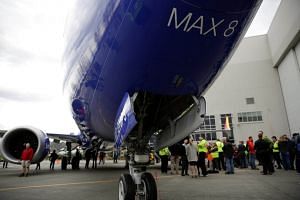 In a statement on Monday evening, the Federal Aviation Administration, which oversees air safety in the United States said, "External reports are drawing similarities between this accident and the Lion Air Flight 610 accident on Oct 29, 2018. However, this investigation has just begun and to date we have not been provided data to draw any conclusions or take any actions."

The statement added, "This aircraft has a strong safety record in the US, where the FAA continues to closely monitor its performance as part of our everyday oversight of aviation safety."

According to the FAA statement, there are 74 Max 8s in the US-registered fleet, and 387 worldwide.

As carriers grounded those planes, on many airlines, passengers were automatically being rebooked - without even having to call the airline.

How can airlines already operating at capacity move so many passengers to other planes?

Norwegian's statement hinted at the logistical complexity. "All aircraft that are currently airborne will continue to its destination or return to home base. We are now working on reallocating our fleet options with other aircraft types, re-bookings to other flights and combining flights to minimise inconvenience caused to our passengers."

TUI, the world's largest charter airline, which operates five Max 8 planes, said on Tuesday that the planes were grounded.

Air Canada cancelled its Tuesday flight from Halifax to London because the United Kingdom had banned the plane from its airspace.

In a statement, Air Canada said it was working to rebook affected customers as soon as possible through its Montreal, Toronto and Ottawa hubs. It also said customers could rebook their flights at no added cost.

"The reality is that flight cancellations even before this crash were a part of travel," said Mr Douglas Kidd, the executive director at the National Association of Airline Passengers.

According to data at FlightAware.com, a website that tracks flight activity live, major UK airports like Heathrow and Gatwick did not appear to show a spike in the number of cancelled flights.

Passengers choosing to cancel their flights on US carriers scheduled on Max 8s are not being offered refunds by the airlines.

Mr Dan Landson, a spokesman for Southwest wrote in an e-mail that, "we are not issuing refunds of non-refundable fares though we are working with customers individually who wish to rebook their flight to another aircraft type."

Southwest does not charge change fees, and passengers are able to change their flights, paying only the difference in fare.

American Airlines does charge its passengers change fees. When a passenger tweeted on Tuesday that his family was looking to rebook a non-refundable flight, the airline's Twitter account responded that American does not have a travel waiver programme in effect, "but we are confident in the safe operation of all of our aircraft, including the 737 MAX 8."

New York's La Guardia Airport, which serves only North American destinations, was characteristically bustling on Tuesday, its operations more affected by the major construction out front than the nerves of rattled fliers within.

"Statistically, flying is the safest way to travel," said Mr Michael Cadesky, 65, a certified public accountant from Toronto. "It's safer than taking the taxi into midtown."

Mr Cadesky, who takes around 30 flights annually, said he did not care whether he flew on a Max 8 because he suspected the past two crashes were because of poor maintenance or mechanical error, something he doesn't worry about with Air Canada, which he flew on Tuesday.