WASHINGTON - Dozens of Myanmar nationals staged a series of demonstrations in front of the Singapore embassies in Tokyo on Wednesday (July 17) and Washington on Monday to protest against the Singapore Government's arrest and deportation of leaders of the Arakan Association (Singapore).

The six Myanmar nationals were arrested in Singapore last week and deported for illegally garnering support for armed violence against the Myanmar government, Singapore's Ministry of Home Affairs said in a statement last Wednesday (July 10).

The arrested Myanmar nationals were allegedly supporters of the Arakan Army (AA), a Rakhine insurgent group which the Myanmar government has designated a terrorist organisation. The AA is the armed wing of the United League of Arakan, which seeks greater autonomy for the Rakhine state and whose members are mostly ethnic Buddhists.

Protestors in Tokyo held up printed banners calling on the Singapore government to "stop giving up Arakanese" to the Myanmar government, according to photos posted online by the Development Media Group (DMG), an Arakan news agency.

According to a statement from the Arakan Youths Union (Japan), a group of Myanmar nationals have planned a protest outside the Singapore embassy in Tokyo on Wednesday afternoon.

The Japan chapter of the Arakan Youths Union said the arrested individuals were not connected with the Arakan Army but instead were aiding Arakanese refugees in Myanmar. It added that the Arakan Army was not a terrorist organisation but a legitimate rebel army.

Singapore's Ministry of Foreign Affairs said it was aware of the protest, and that a group from the Arakan American Community had delivered a letter to the embassy in Washington regarding the arrest of some Myanmar nationals in Singapore.

"MFA will convey the letter to relevant authorities," said an MFA spokesman in an e-mail.

Monday's protest at the Singapore embassy in Washington was attended by at least two dozen protesters, according to photos posted on the Voice of Arakan Twitter account. 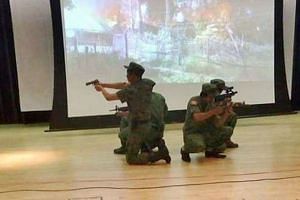 They held handwritten placards which urged Singapore to "stop selling Arakanese to the Myanmar army" and signs with the names of the six Myanmar nationals who had been arrested.

A Burma News International article on the protest cited organisers as "denouncing the Singaporean government for transferring the leaders of the Arakan Association (Singapore) to the Myanmar police force despite knowing the Myanmar Army is committing war crimes in ethnic regions".

It added that there had been a total of 150 people attending two protests in the US capital on Monday, one outside the Singapore embassy and another outside the Myanmar embassy.

Meanwhile, the United States announced on Tuesday that Myanmar's army chief and four other generals would be banned from entering the US due to their roles in human rights abuses, including extrajudicial killings in the Rakhine state, during the military-led ethnic cleansing of Rohingya in August 2017.

"With this announcement, the United States is the first government to publicly take action with respect to the most senior leadership of the Burmese military," said US Secretary of State Mike Pompeo in a statement which used Myanmar's former name of Burma.