WASHINGTON (REUTERS) - Looking for a quick way to stop North Korean missiles immediately after lift-off, the Pentagon is studying as a near-term option whether a group of F-35 fighter jets hovering around North Korean airspace could pick off freshly launched rockets.

In its current form, the idea defies physics, missile defence experts say. It calls for interceptor missiles that fly so fast they could melt, one expert said, and the only surefire way for US military aircraft to defeat a missile with current technology would be to fly in hostile airspace, according to three experts interviewed by Reuters.

The idea, part of a six-month study launched last month, shows how the Pentagon is seeking ways to neutralise the threat posed by Pyongyang even as President Donald Trump meets North Korean leader Kim Jong Un this week in Vietnam in his effort to stop Mr Kim's nuclear programme.

Concern over US missile defences has grown with the escalating threat from North Korea. Two years ago, North Korea conducted about a dozen missile tests, some with multiple rockets, including the launch of a suspected inter-continental ballistic missile that could hit the US mainland. They also tested a purported hydrogen bomb.

The F-35 plan under study would likely involve continuously flying a group of the stealthy jets within range of known North Korean missile sites. Once a missile is launched towards US territory, the F-35's advanced sensors would detect and then fire a special air-to-air missile before the Pyongyang projectile exits the atmosphere, the latest missile defence strategy, according to Pentagon leadership.

Military officials say the F-35 option is the one they want to test first because it could use existing military hardware and potentially be operational sooner than other strategies, and at a relatively low cost. At the same time, Pentagon leadership says the tests might reveal a new interceptor is needed, or that the F-35 may have a role only in detecting the just-launched missile and not necessarily also shoot it down.

Speaking about that option after last month's release of the defence strategy review, Under Secretary of Defence for Research and Engineering Michael Griffin said: "We do think it could be both cost effective and... within the bounds of maths and physics." 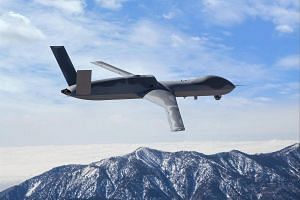 Downing North Korean missiles is hard. So the US is experimenting

Among other proposals included in the review was one involving lasers mounted on drones - proposed to stop missiles just after take-off, in what is called the boost phase.

During this portion of the flight, the missile is most vulnerable, flying at its slowest speed, easily detected by the heat from its engines, and incapable of evading interceptors as it accelerates to break out of the earth's atmosphere.

Geography complicates the F-35 plan. Mr Tom Karako, a missile defence expert at the Centre for Strategic and International Studies in Washington noted that jets lying in wait for a North Korean missile would, in theory, need to respect North Korean airspace. But remaining at such a distance could leave the jets too far from the missile launch to be effective.

Mr Theodore Postol, a missile defence expert at the Massachusetts Institute of Technology said even a modified air-to-air missile would be too slow to take out an intercontinental ballistic missile before it exited the atmosphere.

Air-to-air missiles like those made by Raytheon Co would have only an estimated 200 seconds to hit a ballistic missile before reaching an altitude where the air is too thin to manoeuvre. Given that it would take an F-35 approximately 50-60 seconds to detect, lock onto and launch an air-to-air missile, Mr Postol said, the jet would need to be very close to the ballistic missile to take it out.

"If you are on top of it you can shoot it down," the retired rocket scientist said. "But the odds are going to be very low that you can be on top of it."

Even if a much faster and lighter version air-to-air missile was mounted in an F-35 jet, depending on the distance, the weapon would have to fly so fast it would begin to melt, Mr Postol added.

Despite the obstacles, the very fact that Pentagon was weighing such an option was significant, Mr Karako said. "This shows a broader cultural shift."

Rather than some giant programme, Mr Karako said, the Pentagon is considering "a mission that is integrated into a broader mesh of tactical programs the Department of Defence can call on".

Making it work will be a challenge, though.

"You would need to be very close to the launch site, within North Korea itself," said physicist Laura Grego, who studies missile defence at the Union of Concerned Scientists.

Ms Grego said that even if the air-to-air missile travelled at five times the speed of sound, the F-35 would need to be within about 80km of the missile, "probably closer, to be realistic".

That gives a huge advantage to the stealthy F-35, which could get much closer to a possible launch area than a non-stealth aircraft.

"This is one of the advantages of the F-35," said retired US general David Deptula. He added that the radar-evading jets "can get in much closer to an adversary launch area than... a non-stealthy aircraft".

That suggests that by using the F-35 made by Lockheed Martin, the US could secretly monitor for ballistic missile launches with jets flying inside North Korean airspace.