SEOUL/TOKYO (REUTERS) - North Korea fired a missile on Friday (July 28) that experts said was capable of striking Los Angeles and other US cities and the United States and South Korea responded by staging a joint missile exercise, the South Korean news agency Yonhap said.

The unusual late-night launch added to exasperation in Washington, Seoul and Tokyo over Pyongyang’s continuing development of nuclear weapons and intercontinental ballistic missiles (ICBMs) to deliver them.

“As a result of their launches of ICBM-level missiles, this clearly shows the threat to our nation’s safety is severe and real,” said Japanese Prime Minister Shinzo Abe, who planned to call a meeting of his National Security Council. 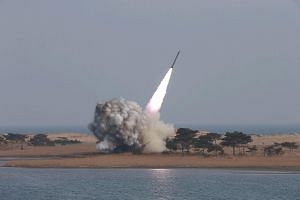 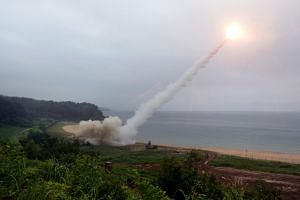 “As a result of their launches of ICBM-level missiles, this clearly shows the threat to our nation’s safety is severe and real,” Japanese Prime Minister Shinzo Abe said.

"With blatant disregard of protests and warnings from the international community, North Korea has taken the reckless action of test-firing a ballistic missile that fell into waters in Japan's EEZ," said Abe.

"The reality is clear that North Korea presents an escalated threat to Japan's safety and security.

"Japan will firmly protest and condemn the launch in the strongest possible terms. Insofar as such provocative actions continue, we will work closely with the US, South Korea, China and Russia among others to strengthen pressure against the North.

"With an eye on the possibility of further provocations by North Korea, Japan will work closely with its ally the US and maintain a status of high alert."

According to a statement from the presidential office, he said Seoul and Washington should immediately discuss ways to strengthen deterrence against the North, including the deployment of additional launchers for a controversial US missile shield installed in South Korea.

Two out of six launchers of the Terminal High Altitude Area Defence, or Thaad, system have already been deployed in Seongju in the eastern province of North Gyeongsang, with four more held in storage pending an environmental review.

Mr Moon also called on the United Nations Security Council to strengthen sanctions against North Korea, and for the South Korean military to raise alertness against further provocations.

The European Union called the launch “an outright violation” of international obligations and a “serious threat” to international peace and security, and urged North Korea to engage in dialogue to pursue denuclearisation of the Korean peninsula.

EU foreign policy chief Federica Mogherini would discuss the matter with the foreign ministers of South Korea and other partners at the Asean ministerial meeting in Manila on Aug 6-7.

‘US CITIES WITHIN RANGE’

South Korean military said the missile was believed to be an ICBM-class, flying more than 1,000km and reaching an altitude of 3,700km.

Japanese Chief Cabinet Secretary Yoshihide Suga declined to confirm to reporters when asked if the missile was an Intercontinental ballistic missile, or ICBM, saying the data was still being analysed by experts.

Japan said the missile likely fall in waters in its exclusive economic zone to the west of Okushri island off Hokkaido.

Japan also said the missile could have reached a height of more than 3,000km on a lofted trajectory. This, combined with the fact it flew 45 minutes, suggests that the missile flew higher and longer than the last July 4 missile that North Korea claimed was a successful test of an intercontinental ballistic missile. North Korean state TV said the Hwasong-14 missile flew 39 minutes and reached an altitude of 2,802km.

Experts had said the July 4 missile was capable of reaching Alaska if fired at a normal trajectory.

South Korea's Joint Chiefs of Staff said the missile on Friday flew 1,000km and reached an altitude of 3,700km. It is estimated to be a "more advanced" ICBM-class missile compared to the Hwasong-14.

In Washington, the US Pentagon also said it had assessed that the missile was an ICBM.

Pentagon spokesman Jeff Davis said the missile was launched from Mupyong-ni, an arms plant in northern North Korea, and landed about 90 nautical miles (167km) from Japan’s island of Hokkaido.

“We assess that this was an ICBM; this is a launch that had been expected,” Davis said.

Davis said the launch did not pose a threat to North America and further analysis was under way.

“Our commitment to the defence of our allies, including the Republic of Korea and Japan, in the face of these threats, remains ironclad. We remain prepared to defend ourselves and our allies from any attack or provocation,” Davis said.

The data on the trajectory indicate the missile was fired at a sharply lofted angle but packed more power than a missile launched earlier this month that US and South Korean officials said was an intercontinental ballistic missile (ICBM), potentially capable of hitting the US mainland.

Jeffrey Lewis of the California-based Middlebury Institute of International Studies said the launch showed Los Angeles was within range of a North Korean missile, with Chicago, New York and Washington DC just out of reach.

“They may not have demonstrated the full range. The computer models suggest it can hit all of those targets,” he said.

The North claimed after the July 4 launch that it had successfully tested an ICBM that flew 933km, reaching an altitude of 2,802km over a flight time of 39 minutes and able to carry a large and heavy nuclear warhead.

The night launch, which was not unprecedented, was significant in demonstrating the ability to disguise the launch, Lewis said.

"A launch from an unexpected place at night demonstrates that we can’t find the missile before they fire it. My guess is the North Koreans wanted to show us that they weren’t trying to hide the launch, but can if they want,” Lewis said.

ADDITIONAL REPORTING BY WALTER SIM  AND CHANG MAY CHOON