WHEELING, WEST VIRGINIA (WASHINGTON POST) - President Donald Trump on Saturday (Sept 29) night turned the fight over the nomination of Judge Brett Kavanaugh to the Supreme Court into a midterm election rallying cry, denouncing "the ruthless and outrageous tactics of the Democrat Party".

Speaking at his rally here, Mr Trump also suggested that Senator Dianne Feinstein, the ranking Democrat on the Judiciary Committee, was responsible for leaking a letter from Dr Christine Blasey Ford detailing her allegation that the judge sexually assaulted her when they were teenagers.

Ms Feinstein has denied that either she or her staff had leaked the letter. The Intercept, which first reported the allegation, has also denied that Ms Feinstein's office was its source.

Earlier on Saturday, before leaving for the rally, Mr Trump struck an optimistic tone about Judge Kavanaugh's confirmation, saying an FBI investigation into sexual misconduct allegations against him that the White House and the Republican Party previously resisted could be a "blessing in disguise".

Mr Trump also contradicted news reports suggesting the investigation would be limited in scope, at the White House's request.

"They have free rein," he said of investigators. "They can do whatever they have to do, whatever it is that they do. They'll be doing things we have never even thought of."

He added: "And hopefully at the conclusion everything will be fine." 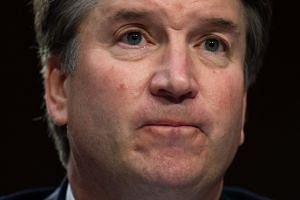 At the rally, Mr Trump framed the resistance to Judge Kavanaugh's nomination in partisan terms, despite Senator Jeff Flake and two other Republican Party senators forcing the additional FBI probe.

While Mr Trump has said the process should play out, he has also repeatedly suggested a failure to confirm Judge Kavanaugh would be a shame. He praised Judge Kavanaugh's angry and defiant testimony last Thursday, which followed Dr Ford's appearance in front of the Senate Judiciary Committee.

"On Thursday, the American people saw the brilliant and really incredible character, quality and courage of our nominee for the United States Supreme Court, Judge Brett Kavanaugh," Mr Trump said.

"A vote for Judge Kavanaugh is also a vote to reject the ruthless and outrageous tactics of the Democrat Party."

Last Friday, Mr Trump ordered a one-week delay in a vote on Judge Kavanaugh so that the FBI could investigate the sexual misconduct claims that have upended the nomination process. The probe, which the Republican Party had resisted, was forced by Senator Flake's last-minute decision to withhold his previously expressed support for Judge Kavanaugh.

This was Mr Trump's second trip to West Virginia in as many months in support of state Attorney-General Patrick Morrisey, who trails incumbent Senator Joe Manchin III in most polls. The president has frequented West Virginia, which is the closest strongly pro-Trump state to Washington, throughout his presidency.

A RealClearPolitics average of polls has Mr Manchin ahead by just over nine points, but Republicans hope the state's conservative lean will narrow the gap in the weeks to come.

Mr Manchin is one of two key Democrats who has not signalled opposition to Judge Kavanaugh yet. Last Friday, he joined with Mr Flake and two other Republican senators to force the new FBI probe.

Mr Trump on Saturday night also continued to fight back against the perception that world leaders diminished him last week by laughing at his claims of success at the United Nations General Assembly.

"Everybody is respecting us again," he said. "I just left the United Nations. Believe me: They respect us."

Mr Trump also said he "fell in love" with North Korean leader Kim Jong Un, whom he met at a summit in June in Singapore.

"I was being tough and so was he, and we were back and forth, then we fell in love. He wrote me beautiful letters and they were great letters. We fell in love," he said, immediately noting that the news media would say he was being "unpresidential".

The evening rally begins a heavy campaign travel period for Mr Trump, who will visit five friendly states in the coming week as he seeks to boost Republican prospects in the Nov 6 midterm elections.