WASHINGTON (WASHINGTON POST) - Lawyers representing Jeffrey Epstein's accusers said Saturday (Aug 10) that his death will not stop their clients from seeking justice from those they say enabled or conspired with Epstein to allegedly sexually abuse dozens of underage girls.

The attorneys condemned as cowardly Epstein's apparent suicide overnight while in federal prison on charges of sex trafficking because now he will not ever have to facethe women he allegedly hurt.

"I guess there is somewhat an element of relief because the fear of him getting out is obviously over, but there is also, they'll never be able to look into his eye and say, 'You hurt me.' There's that element of closure that he's taken away from them," said Kimberly Lerner, an attorney for one of Epstein's accusers.

But, Lerner said, Epstein's death is not "the end, it's just a new beginning." "There's a whole network that enabled him and allowed this to happen and it's time that everyone who was a part of this be held accountable," she said.

Lerner's client, Jennifer Araoz, released her own statement about Epstein's death. Araoz has accused Epstein of raping her in his New York City home when she was 15. She said she was recruited outside her high school to make regular visits to his house.

"We have to live with the scars of his actions for the rest of our lives, while he will never face the consequences of the crimes he committed the pain and trauma he caused so many people," Araoz said. "Epstein is gone, but justice must still be served. I hope the authorities will pursue and prosecute his accomplices and enablers, and ensure redress for his victims."

Epstein's death came less than a day after new details about his alleged sexual abuse of underage girls were unsealed in court filings. In the documents - part of a lawsuit settled in 2017 against a woman who allegedly recruited underage girls for Epstein - accuser Virginia Roberts Giuffre named Prince Andrew, former New Mexico governor Bill Richardson, D, and former Senate majority leader George Mitchell, D-Maine, among the prominent men in Epstein's orbit she was directed to have sex with. 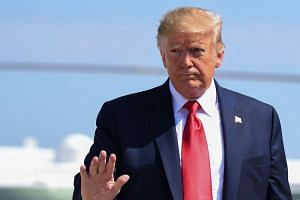 All three men have denied any wrongdoing. Epstein, a multimillionaire, kept powerful company and socialised with both President Trump and former president Bill Clinton.

Epstein was arrested last month on federal sex trafficking charges that could have put in him prison for 45 years.

New York University Law School professor Stephen Gillers said Epstein's death puts an end to that prosecution, but it does not mean the investigation is over."Is there the equivalent of a little black book whose contents implicates others? Was incriminating video, email or voice mail found in his mansion's safe?" Gillers said. "While the case against Epstein is over, the investigation is not."

Federal investigators, who earlier this year asked women who had allegedly been abused by the financier to come forward, may decide to keep digging as they explore whether any of Epstein's alleged procurers and enablers should be charged.

Even if there are no further criminal cases, Epstein's estate will be peppered with civil suits seeking restitution and damages for both his alleged financial and sexual misdeeds. Epstein spent the last dozen years of his life fending off lawsuits from some of the women who said he had abused them, and more women have been emboldened to speak about their experiences with him in recent months.

But all those cases will face a long and convoluted road, because Epstein, according to several of his associates, was both secretive about his finances and adept at hiding resources in foreign accounts. Epstein's first business partner, Steven Hoffenberg, said the financier had more money than he had admitted in court documents and that it was tucked away in places where law enforcement officials would have a difficult time finding it.

Attorney Lisa Bloom, who currently represents two Epstein accusers, said she'd been helping them cooperate with law enforcement on the criminal case. Now that Epstein is dead, she said, they will be filing a civil case against his estate.

"I am calling today for the administrators of Jeffrey Epstein's estate to freeze all his assets and hold them for his victims who are filing civil cases. Their lives have been shattered by his sexual assaults, their careers derailed. They deserve full and fair compensation NOW," she tweeted. "Jeffrey Epstein's jail suicide means one thing and one thing only: consciousness of guilt." Bloom later tweeted a statement from an unnamed client who said Epstein's death stole her chance for closure.

"I'm angry as hell the prison could have allowed this to happen and that I and his other victims will never see him face the consequences for his horrendous actions," the accuser said.

Epstein's death could intensify the spotlight on his longtime girlfriend Ghislaine Maxwell. One of Epstein's accusers has said Maxwell recruited underage girls for Epstein. Maxwell has denied any wrongdoing and has fought back aggressively in civil suits that have been meandering through courts for years. Calls and emails to Maxwell's attorneys were not returned Saturday.

Sigrid McCawley, who represents Giuffre, said in a statement: "The reckoning of accountability begun by the voices of brave and truthful victims should not end with Jeffrey Epstein's cowardly and shameful suicide.

"The fact that Epstein took his own life within 24 hours of the unsealing of detailed and devastating documents and exhibits in Virginia Giuffre's lawsuit against Ghislaine Maxwell, which informed the public of the scope, scale and sophistication of the international sex trafficking operation Epstein conducted, is no coincidence," McCawley said.

Spencer Kuvin, who represents three of Epstein's accusers - all Royal Palm Beach High School students in Palm Beach County, Florida, when they allegedly worked for Epstein - said he spoke with one of his clients after the news of Epstein's death and described her as "numb." "She's numb to what occurred because of the history and she wanted for years to put this behind herself," he said. "Seeing an evil person like this ultimately end his life puts some closure on what occurred." "She would like to see a continued prosecution and investigation into those that allowed all this to happen," he said.

Another lawyer for accusers, Bradley Edwards, said this wasn't the ending anyone hoped for because Epstein's alleged victims deserved more.

"The fact that Jeffrey Epstein was able to commit the selfish act of taking his own life as his world of abuse, exploitation, and corruption unraveled is both unfortunate and predictable," Edwards said. "The victims deserved to see Epstein held accountable, and he owed it to everyone he hurt to accept responsibility for all of the pain he caused. We will continue to represent his victims and will not stop in their pursuit of finality and justice. It is never too late to come forward with information."