NEW YORK (BLOOMBERG) - Jeffrey Epstein is dead in an apparent suicide, but the women who say he sexually abused them plan to seek justice by suing his estate and helping any prosecutions of his enablers, according to lawyers and one of the women.

Epstein, a financier accused of sex trafficking and conspiracy, was found dead on Saturday morning (Aug 10) in his jail cell in lower Manhattan.

He was accused last month of trafficking underage girls from 2002 to 2005, but authorities may have expanded the case after dozens of potential victims contacted the FBI.

Last month, Jennifer Araoz said he had raped her when she was a 15-year-old New York City high school student.

On Saturday, she was angry that Epstein won't have to face the survivors of his abuse in court.

"We have to live with the scars of his actions for the rest of our lives, while he will never face the consequences of the crimes he committed," or the "pain and trauma he caused so many people," Araoz said in a statement.

"Epstein is gone, but justice must still be served."

Dozens of women claim that Epstein lured them to his Palm Beach, Florida, mansion, where he coerced them into sex, paid them, and asked them to bring him other girls.

At least one other woman claims that Epstein trafficked her to his rich and powerful friends.

The abuse allegedly took place as well at his Manhattan mansion, his Virgin Islands island and his New Mexico ranch property.

Epstein will now carry to his grave the secrets of his sordid conduct, the escapades of his wealthy friends, and the mysteries of his financial dealings.

"Jeffrey Epstein's victims have once again been cheated out of an opportunity for justice," said Jack Scarola, a Florida attorney who represented five women and litigated with him for 12 years. 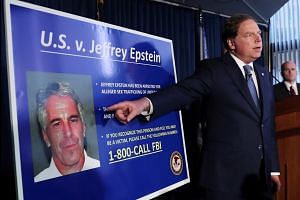 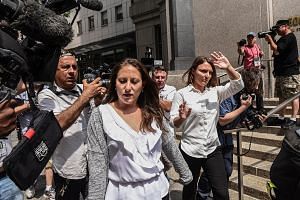 Lawyers said that victims may pursue civil lawsuits against the estate of Epstein, a process that could take years and run up against laws barring claims that are too old.

A decade ago, more than two dozen women reached confidential settlements with Epstein in Florida.

The size of Epstein's estate is unknown, although prosecutors say that after his arrest, he claimed a net worth of US$559 million (S$770 million).

Many questions have arisen since then about his wealth and business practices.

Araoz's lawyer said she planned to sue under a New York law that takes effect on Aug 14, giving victims of child sexual abuse one year to sue over older claims. In Florida, sexual abuse victims have four years to file claims, with some exceptions for children, said Scarola.

Emotions ran high for lawyers and victims on Saturday.

"It's possible that other people who conspired to protect Epstein, destroy evidence, pay off witnesses, or otherwise facilitate his sexual trafficking and predatory pedophilia may be charged," said attorney Josh Schiller of Boies Schiller Flexner in Manhattan, whose firm represents nine victims.

"They may also be sued individually as they are identified."

One person at potential risk is Ghislaine Maxwell, a friend of Epstein's who at least one victim has accused of procuring underage girls for him. She settled an earlier case, but could be named in other lawsuits.

Attorney Lisa Bloom, who represents three women, said the estate should preserve assets for his victims.

"I am calling today for the administrators of Jeffrey Epstein's estate to freeze all his assets and hold them for his victims who are filing civil cases," Bloom said in a tweet. "Their lives have been shattered by his sexual assaults, their careers derailed. They deserve full and fair compensation NOW."

From one of my Jeffrey Epstein victim clients this morning. pic.twitter.com/8gRozyQPMP

I am calling today for the administrators of Jeffrey Epstein’s estate to freeze all his assets and hold them for his victims who are filing civil cases. Their lives have been shattered by his sexual assaults, their careers derailed. They deserve full and fair compensation NOW.

Epstein entered a controversial non-prosecution agreement more than a decade ago with US prosecutors, which barred federal charges in the Southern District of Florida against him and four named conspirators. Instead, he admitted to two state prostitution charges and served 13 months in jail.

"I hope and expect that the investigation into his co-conspirators is ongoing and will continue," Scarola said. "It's hard to imagine that there is not an ongoing investigation into the involvement of others in Epstein's criminal activities."

A federal judge ruled in February that the Justice Department broke the law by making that deal without consulting the accusers. Labour Secretary Alexander Acosta, who was the lead federal prosecutor in Florida, resigned last month because of renewed public fury over the case. The judge in Florida is considering how to proceed in that case, in which Epstein was a party.

In his civil lawsuits a decade ago, Epstein repeatedly invoked his constitutional right against self-incrimination before settling cases.

Epstein's death came a day after a federal appeals court unsealed hundreds of pages of documents in a case that revealed new details about how he allegedly lured his victims and who enabled his sexual crimes.