FORT COLLINS, COLORADO (REUTERS) - One of the main features of last week's "Phase One" trade deal between the United States and China was China's alleged commitment to purchase a sky-high amount of US agricultural goods, though market participants are highly sceptical, and with good reason.

US officials said China's annual purchase of US farm products would jump to between US$40 billion (S$54 billion) and US$50 billion over the next two years, as much as double the pre-trade war values.

Such an anomalous increase is already extremely suspect, but unfortunately for hopeful market-watchers, Beijing has been unwilling to confirm it plans to purchase any specified amount of American agriculture.

Moreover, China has recently emphasised its desire to purchase US farm goods based on market conditions, which is how agriculture trade generally works in the global marketplace.

China does not want to hurt its domestic market by dumping an unnecessary supply of American goods on its consumers.

Chinese officials did mention in a press conference on Friday (Dec 13) that a notable increase in US agricultural purchases was planned, but what would it take to reach or surpass US$40 billion, and is that even feasible?

China's vice minister of agriculture said in Friday's news conference that the country's 2018 agricultural imports from all suppliers totalled US$137.1 billion. Some US$16.23 billion of that was from the United States.

Between 2015 and 2017, China's US farm imports were closer to US$24.2 billion per year, according to the vice minister. US records show the maximum annual export value of agricultural products to China was just under US$26 billion in 2012.

In 2017, American agricultural exports to all destinations were valued at US$138 billion, with some US$19.5 billion of that to China. Some figures cite that US ag exports to China in 2017 were valued at US$24 billion out of a total US$158 billion, and that is true when also including related products like fish and forestry items, which are not captured in "agricultural products". (https: tmsnrt.rs/2YTUyTg) 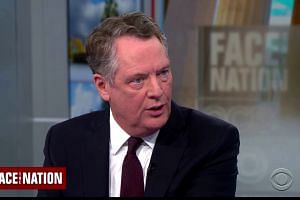 China to buy US$50 billion in US farm products in return for tariff concessions: US sources

China to waive tariffs for 'some' US soybeans, pork

Ethanol is considered a related product, for example, and the maximum US export value to all destinations was US$3.3 billion in 2011. The maximum to China was US$313 million in 2016, though many market-watchers believe US ethanol is a great candidate for additional Chinese purchases.

But soybeans are the big-ticket item in terms of US ag exports to China, and nothing else even comes close. In the 10 years prior to the trade war, about 60 per cent of the total exported value of US farm products to China came from soybeans.

US soybean exports to all destinations were valued at US$21.5 billion in 2017.

Without a substantial increase in soybean exports, it is hard to imagine that all other exports could make up enough ground to come within firing distance of the US$40 billion target.

Not only is Chinese soybean demand softer than in years past due to the outbreak of African swine fever (ASF) in its hog herd, but it already has a reliable soybean supplier in Brazil.

The United States and Brazil account for more than 80 per cent of the world's soybean exports, but Brazil is easily No. 1 and is set to ship nearly 60 per cent more of the oilseed in 2019-20 than the United States.

More than 75 per cent of Brazil's soy exports head to China, and the South American country sent about 55 million tonnes there between January and November, nearly 20 per cent more than the United States shipped to all destinations during the same time frame.

Forcing more US soybeans to China under a trade agreement would free up more Brazilian supply to other buyers, which could have a profoundly negative impact on the US soybean market.

Commodity prices are extremely different today than when US agricultural trade reached highs in terms of dollar values, which is another reason the US-quoted figure is hard to fathom.

With most of the major US agricultural exports, the maximum volume exported does not often coincide with the maximum export value of that product. Higher prices temper demand while lower prices add up to lower overall values.

Just to give an idea of the scope of US$40 billion or US$50 billion worth of US agricultural goods, the maximum annual value of corn, wheat, and soybean exports to all destinations was US$42.4 billion in 2011. Adding up the individual maximum years, which are 2012 for soybeans, 2011 for corn, and 2008 for wheat, would yield US$49.7 billion.

China's struggles with ASF have already prompted record US exports of pork to the Asian country this year with the potential for more next year. But if trying to reach a certain dollar value for exports, pork and other meat will not swing the needle enough.

In 2018, the United States exported US$19 billion worth of pork, beef, poultry meat and products to all customers, just shy of 2014's record, but shipments to China were only 4 per cent of that total. Some US$1.13 billion of US pork, beef, and poultry was shipped to China in 2013, and that was 6 per cent of the total.

Another idea is that farm equipment could be included as part of the US plan to boost agricultural exports to China.

But once again, historical amounts are paltry when compared with the lofty target.