NEW YORK (BLOOMBERG) - United States federal authorities began a criminal probe of the certification process for the new 737 Max planes, after the first of two catastrophic crashes since October, according to a person who wasn't authorised to speak about the investigation and asked not to be named.

A Lion Air 737 Max jet crashed soon after take-off from Jakarta on Oct 29 last year, triggering questions over whether the plane's new anti-dive system was to blame. Less than five months later, an Ethiopian Airlines 737 Max 8 crashed near Addis Ababa on March 10. Nearly 350 died in both disasters.

Now, Boeing and the US regulator are facing intense scrutiny over the plane's avionics and how the aircraft was certified.

On Tuesday, the Transportation Department's inspector-general said it conducting a review of how the plane was certified to fly, while a grand jury under the US Justice Department is seeking records in a possible criminal probe of the plane's certification.

But prosecutions are unusual following US air disasters, where investigators tend to focus on determining the cause of a crash so it can be fixed.

"We want to encourage people to come forward and admit mistakes, free from fear of reprisal or jail," said Mr Kenneth Quinn, a former chief counsel of the Federal Aviation Administration who now represents airlines and aerospace companies.

"The last thing the industry and FAA need is the spectre of a criminal investigation hovering over an accident inquiry." 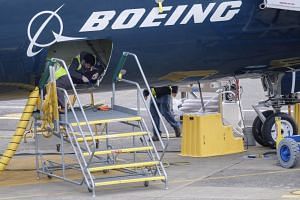 There's little precedent for plane-makers like Boeing facing US criminal charges over deadly crashes, though there may be risks of prosecution if the company lied to regulators about the safety of its 737 Max jets.

The government could bring fraud charges if it determines the company lied to the authorities or tried to cover up concerns about the aircraft's systems, the former prosecutors said.

"The key piece for criminal investigators will be looking for any evidence of knowledge of a defect, and how that was addressed," said Mr Ryan Rohlfsen, a former Justice Department prosecutor now at Ropes & Gray LLP in Chicago.

"Someone did something wrong, and then covered it up, is classic evidence of fraud and criminal intent. Compare that with a routine review of technical issues that appear contemporaneously to be sorted out, where you might have mistakes - but likely not a crime."

For a guide to what may happen with Boeing, the past failings by automakers could prove useful.

GM agreed in September 2017 to pay US$900 million (S$1.22 billion) to settle a criminal probe, admitting that it failed to disclose to regulators a defective ignition switch that had been linked to at least 124 deaths. The company was charged with wire fraud and conspiracy for its scheme to hide a "deadly safety defect" from regulators. GM entered into a deferred prosecution agreement. To date, no individuals have been prosecuted.

Toyota agreed to pay US$1.2 billion in 2014 to end a criminal investigation into sticky gas pedals and shifting floor mats linked to sudden, unintended acceleration. The US charged Toyota with wire fraud, alleging the company misled consumers and federal regulators about the problem. The company entered into a deferred prosecution agreement, admitting responsibility. No individuals were charged.

"This, unfortunately, is a case that demonstrates that corporate fraud can kill," US District Judge William Pauley said in court when accepting the deal.

Takata pleaded guilty in February 2017 to one count of wire fraud for misleading automakers about the safety of its exploding air bags, which had been linked to at least 17 deaths. The company agreed to a US$1 billion settlement, including a US$25 million fine, US$850 million to automakers for recalls and US$125 million in compensation to accident victims.

While a criminal case against Boeing seems unlikely, "it could be a legal nightmare" for the company if it misled regulators or hid information to speed approval of the 737 Max design, said Mr Marc Moller, who represents victims and families in air crash claims. The FAA could impose a whopping fine and victims' families could demand large cash settlements or punitive damages, he said.

The criminal probe could aid civil lawsuits if plaintiffs can get hold of evidence collected by the government, said Mr Mike Slack, a lawyer for crash victims with the Austin, Texas, firm Slack Davis Sanger.

"In any civil litigation, we gather evidence," Mr Durkin said. "If people are taking the 5th, it deters us in seeking the ultimate truth."

In 1996, federal and state authorities investigated airline maintenance contractor SabreTech after the crash of a ValueJet plane in southern Florida. Prosecutors claimed company employees had loaded oxygen generators on the flight in violation of safety rules. The generators exploded after take-off, causing the crash of a DC-9 and the death of all on board.

Federal prosecutors charged SabreTech and three employees, two of whom were found not guilty at trial. The third fled and remains a fugitive. SabreTech was found guilty of mishandling hazardous materials and failing to properly train its employees, though the conviction on the federal mishandling charges was reversed on appeal.

SabreTech settled state murder and manslaughter charges by pleading no contest to a charge of mishandling hazardous waste and agreeing to pay US$500,000.