ADDIS ABABA (NYTIMES) - Ethiopian Airlines surpassed many carriers by becoming one of the first to install a simulator to teach pilots how to fly the new Boeing 737 Max 8, but the captain of the doomed Flight 302 never trained on the simulator, according to people close to the airline's operations.

The people, who spoke on condition of anonymity because Ethiopian Airlines had not authorised disclosure of the information, said the carrier had the Max 8 simulator up and running in January, two months before Flight 302 crashed.

Boeing has said that experienced 737 pilots needed little training for the new Max 8, an assertion that has now come under close scrutiny by regulatory officials and pilots at other airlines. Two of the planes have fatally crashed in the past five months, and regulators around the world grounded all Max 8s last week.

The pilot of Flight 302, Mr Yared Getachew, who had 8,000 hours of flying experience including on the 737, took a refresher course on a different simulator in late September and early October, according to one person familiar with the airline, and was not due for another round of simulator training until after the March 10 crash.

It was unclear if the second pilot on Flight 302, the co-pilot, had trained on the Max 8 simulator. Nor was it clear if the airline had used the simulator for refresher courses it requires pilots to take every six months, or only to train new pilots.

Still, use of the simulator by Ethiopian Airlines means the carrier was among the few in the world that not only had a working simulator for Boeing Max jets but also was using it a few months after the first Max 8 crash of Lion Air Flight 610.

Despite Boeing's assertions that the plane was safe, the crashes have raised questions about whether Boeing and its United States regulator, the Federal Aviation Administration, did enough to train pilots on how to deal with the Max 8's new features, in particular an automated system to prevent stalls, the MCAS. 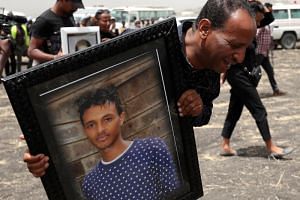 Boeing said that pilots who had flown earlier models did not need additional simulator training, and even after the October crash in Indonesia, the FAA agreed.

Many pilots learnt the new features of the Boeing Max on an iPad, and many were not originally informed of the existence of the MCAS, which can push the plane's nose down if it is approaching a stall.

The Ethiopian and Lion Air flights crashed minutes after take-off and showed similar up-and-down oscillations before fatal nose-dives. A central focus of the Indonesian investigation is the possibility that the automated system pushed the nose down into a fatal dive because of inaccurate input from a sensor.

Even if both pilots on Flight 302 had trained on the simulator, it is unclear if such preparation would have included manoeuvres to deal with the kinds of problems they may have faced.

In a bulletin issued in November, Boeing said that emergency procedures that applied to earlier 737 models would have corrected the problems that may have contributed to the Max 8 crash in Indonesia.

Pilots for Ethiopian Airlines, who declined to speak on the record, said they pay close attention to bulletins issued by aircraft manufacturers, especially following an accident. One pilot said failing to read the bulletins would be tantamount to "walking out of your house naked".

The Ethiopian crash has brought new scrutiny to the MCAS. The system was designed to compensate for changes to the aerodynamics that arose from alterations to the size and position of the engines on the wings.

The pilots on the doomed Lion Air flight did not appear to understand why the jet was tipping downward and how to correct that problem. One flipped through a technical manual, and the other began to pray, according to the cockpit voice recording.

An investigation is still underway to determine what caused the crash in Ethiopia. A possible fault in the MCAS is part of the inquiry, and the authorities in Ethiopia have said that a preliminary review of the "black boxes" - voice recording and flight data - revealed similarities to the Indonesian crash.

But experts have cautioned that any conclusions at this stage of an investigation are preliminary and could change.

On Wednesday (March 20) in Washington, the FAA published a notification to regulators in other countries reiterating that Boeing was preparing a software upgrade for the 737 Max along with training to accompany the updated software.

The FAA said its review of the new software and training was "an agency priority, as will be the rollout of any software, training or other measures to operators of the 737 Max". The message from the FAA did not reveal any new information about what may have led to the crash in Ethiopia.

"Understanding the circumstances that contributed to this accident is critical in developing further actions and returning aircraft to service," the FAA said.

In a further sign of scrutiny facing Boeing and the FAA, a Senate subcommittee on aviation and space said it was planning a hearing next Wednesday on airline safety.

"In light of the recent tragedy in Ethiopia and the subsequent grounding of the Boeing 737 Max aircraft, this hearing will examine challenges to the state of commercial aviation safety, including any specific concerns highlighted by recent accidents," the subcommittee said in a statement.