RIYADH (AFP) - Fifty wounded Houthi militants in Yemen's rebel-held capital will be evacuated to Muscat for treatment on Monday (Dec 3), a Saudi-led military coalition said, calling it a "confidence building" measure ahead of planned peace talks in Sweden.

The evacuation on a UN chartered plane marks a key step forward in kickstarting stalled negotiations as world powers press for an end to the brutal four-year conflict that has pushed Yemen to the brink of famine.

The fate of wounded rebels had been a stumbling block to the start of a previous round of aborted peace talks in September.

"A UN chartered plane will arrive at Sanaa international airport Monday to evacuate 50 wounded combatants accompanied by... three Yemeni doctors and a UN doctor, from Sanaa to Muscat," coalition spokesman Turki al-Maliki said in a statement carried by the official Saudi Press Agency.

The coalition agreed to facilitate the medical evacuations at the request of UN envoy Martin Griffiths for "humanitarian reasons" and as a "confidence building" measure, Maliki added in the statement on early Monday.

There was no immediate reaction from Houthi rebels or the United Nations.

The proposed UN-brokered peace talks have been backed by both the rebels and the Saudi-led government and were expected to take place in Sweden this week.

UN Secretary-General Antonio Guterres, however, has played down the early December schedule and said he hoped talks would start "this year". 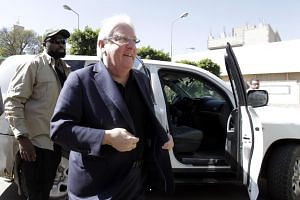 US urges UN to hold off on Yemen resolution

Houthi rebels have said they will attend the talks if they are guaranteed safe passage.

Previous talks planned for September in Geneva failed to get underway as the Houthi delegation never left Yemen's rebel-held capital Sanaa, arguing that the United Nations could not guarantee their safe return.

They also accused the world body of failing to secure the evacuation of wounded rebels to Oman.

Previous talks broke down in 2016, when 108 days of negotiations in Kuwait failed to yield a deal and left rebel delegates stranded in Oman for three months.

In recent days, Griffiths has held talks separately with officials from both warring parties as part of efforts to lay the ground work for talks in Sweden.

UN aid chief Mark Lowcock warned last week that Yemen was "on the brink of a major catastrophe", following a trip to the war-wracked country.

His comments came after renewed deadly clashes between Houthi rebels and pro-government forces in the Red Sea port city of Hodeida, which is vital for the flow of humanitarian aid.

Under heavy international pressure, Saudi-backed pro-government forces have largely suspended an offensive launched in June to take the port city.

Sporadic fighting has however continued since a fragile truce began on Nov 13.

The United Nations has described Yemen as the world's worst humanitarian disaster, with at least 10,000 people killed since the intervention began in 2015. Rights groups fear the actual toll is far higher.