UNITED NATIONS (AFP) - A UN draft resolution on Yemen presented to the Security Council on Monday (Nov 19) calls for an immediate truce in the port city of Hodeida and sets a two-week deadline for the warring sides to remove all barriers to humanitarian aid, according to the draft seen by AFP.

Britain circulated the draft to the 14 other council members after hearing a report on Friday from a UN envoy working to arrange peace talks in Sweden to end the nearly four-year war.

A vote on the measure has yet to be scheduled.

The proposed resolution would significantly ratchet up the pressure on the Saudi-led coalition and the Iran-backed Houthi rebels to seek a negotiated settlement in Yemen, where millions are on the brink of starvation.

The United Nations considers Yemen the world's biggest humanitarian crisis and has warned that without a stop to the fighting, the country will face one of the worst famines in decades.

The draft text calls "on the parties to introduce a cessation of hostilities in Hodeida governorate, to end all attacks on densely populated civilian areas across Yemen and to cease all missile and UAV attacks against regional countries and maritime areas."

The Red Sea port of Hodeida, which is controlled by the Houthis and is a key point of entry for aid and imports to Yemen, has seen heavy fighting over the past weeks.

The text calls on warring sides to "facilitate the unhindered flow of commercial and humanitarian food, water, fuel, medicine and other essential imports across the country, including by removing within two weeks of the adoption of this resolution, any bureaucratic impediments that could restrict such flows."

The truce would go into effect on the day of the adoption of the resolution. 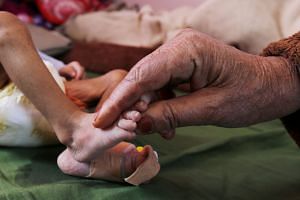 Under the proposed measures, UN Secretary-General Antonio Guterres would report to the council within two weeks on the cessation of hostilities.

The council said it was ready to "consider further measures" to support a political solution the war, the draft said.

Salaries to be paid within a month

The measure calls for a large injection of foreign currency into the economy through the central back to support the collapsing currency and for salaries of civil servants, teachers and health workers to be paid within one month.

It supports a series of confidence-building measures aimed at paving the way to peace talks including the release of prisoners, the re-opening of the airport in the rebel-held capital Sanaa to commercial flights and strengthening the central bank.

The warring sides are urged to engage with UN envoy Martin Griffiths, who is due to travel to Sanaa this week to finalise arrangements for the peace talks that he hopes to convene soon.

Yemen's internationally recognised government said Monday it will take part in the talks, hours after the head of the Houthi rebel revolutionary committee, Mohammed Ali al-Huthi, said he was ready to freeze military operations.

The Saudi-led coalition has been waging a war in Yemen since March 2015 to push back the Huthis and restore to power Yemeni President Abedrabbo Mansour Hadi, whose government is recognized by the United Nations.