"At a time when Iran seeks to use Syria as a platform to destroy Israel, President Trump boldly recognises Israeli sovereignty over the Golan Heights," he wrote on his personal Twitter account. "Thank you President Trump!"

At a time when Iran seeks to use Syria as a platform to destroy Israel, President Trump boldly recognizes Israeli sovereignty over the Golan Heights. Thank you President Trump! @realDonaldTrump

Mr Trump's statement of intent on the strategic plateau Israel seized in the Six-Day War came after US Secretary of State Mike Pompeo visited Jerusalem and stood shoulder-to-shoulder with Mr Netanyahu at the Western Wall in the city's Israeli-annexed eastern sector.

It was the first time such a high-ranking US official had visited the highly sensitive site in the Old City, part of the mainly Palestinian east of Jerusalem, alongside an Israeli premier.

Both US gestures serve to boost Mr Netanyahu's campaign for a fifth term, less than three weeks before Israel's April 9 elections.

Mr Netanyahu's office said he had spoken to Mr Trump by phone and thanked him personally for his decision, telling him: "You made history." Mr Netanyahu has been pushing for the White House to recognise Israel's sovereignty over the Golan, and Mr Trump tweeted Thursday that "it is time" to do so. 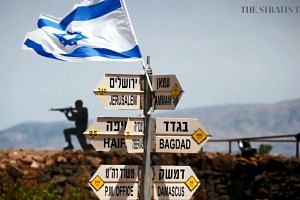 Mr Pompeo's visit with the premier to the Western Wall, one of the holiest sites in Judaism, could be taken as tacit approval of Israel's sovereignty over the city's eastern sector, which is claimed by the Palestinians.

Israel sees the entire city as its undivided capital.

Although the Palestinians make no territorial claim to the Golan, senior official Saeb Erekat slammed Israel's rule over the 1,200 square kilometre (460 square mile) swathe it took from Syria.

"(Mr Trump's) policy does not change international law, which considers the Golan and all of the Palestinian land occupied in 1967 to be occupied Arab land," he told AFP.

"It will stay like that despite all the attempts of the (Israeli) occupation and the American support for it."