TEHERAN (BLOOMBERG) - A Boeing Co 737-800 jetliner bound for Ukraine that crashed after takeoff in Iran, killing everyone on board, was most likely brought down by an engine fire, according to Teheran authorities.

Ukraine International Airlines said 167 passengers and nine crew were on the plane, an older version of the 737 that predates Boeing's grounded Max model, which crashed at 6.18am local time on Wednesday (Jan 8) in Sabashahr, near the Iranian capital.

Iran's Disaster Mitigation and Management Organisation said early assessments indicate the cause was a technical issue and the transport ministry suggested a fire was to blame, dismissing speculation that the jet was downed by a stray missile following Iranian strikes against US bases in Iraq.

At the same time, another state-run outlet cited an official from the Iran Civil Aviation Organisation as saying the pilots didn't declare an emergency, while an amateur video purportedly of the stricken plane showed a bright image descending steeply before hitting the ground.

Television footage showed recovery efforts at the crash sight, with debris from the plane spread across a charred field.

Ukraine's foreign ministry said about half those on board held Iranian citizenship and that there was also a large number of Canadians, as well as Swedes, Afghans, Britons and Ukrainians.

Ukraine International vice-president Ihor Sosnovskyi said in Kyiv that the plane, delivered to the airline new in 2016, was in good condition and had its last shop visit on Jan 6.

He said the crew was also very experienced and that there were no indications of human error, while declining to comment on possible reasons for the crash, the company's first since it was set up in 1992.

The tragedy comes at a tense time for both Iran and Boeing.

The Islamic republic has fired more than a dozen missiles at US-Iraqi airbases in retaliation for the killing of Iran's top general Qassem Soleimani.

Just prior to the crash, US aviation regulators issued new restrictions barring civilian flights over Iraq and Iran. Boeing is still reeling from its worst-ever crisis following two deadly crashes involving the 737 Max that led to the grounding in March of the company's best-selling model.

US stock futures slid and the yen rose, though those moves faded after reports that the crash was due to a technical issue.

Boeing declined as much as 2.5 per cent in pre-market trading.

Under established protocols, Iran would lead any investigation since the crash occurred on its soil. Ukraine Prime Minister Oleksiy Honcharuk said his government has informed Iran that its experts should take part in the investigation.

Few nations have the expertise and technical facilities to conduct a full accident probe, however, so the US, France, Britain or other countries have provided assistance in the past.

The plane's crash-proof recorders, for example, will have to be downloaded in a specialist lab. The so-called black boxes have been found, Agence France-Presse reported, citing aviation officials in Iran.

International rules for air crash probes mean the countries that made the plane and its engines usually participate, providing technical expertise. 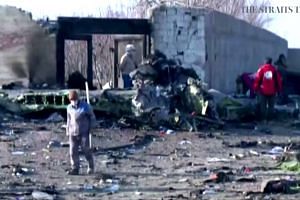 But the current turmoil between Iran and the US may complicate the involvement of the National Transportation Safety Board and Boeing.

"We are aware of the media reports out of Iran and we are gathering more information," Boeing spokesman Gordon Johndroe said in an e-mail.

Safran SA confirmed that the twin-engine plane was powered by turbines from its CFM venture with General Electric Co, while declining to comment further.

The jet lifted off and climbed to about 7,900 feet and was travelling at roughly 300 miles an hour when it stopped transmitting its position and disappeared, according to data supplied by FlightRadar24.

Boeing is still struggling with the fallout from the Max crashes in Indonesia in October 2018 and Ethiopia last March as regulators mull proposed fixes for flaws discovered in the plane's flight-control system.