CAIRO (XINHUA, BLOOMBERG, REUTERS) - Blocked for almost a week after one of the world's largest container ships was blown into its banks and got stuck, hopes have risen of maritime traffic flows resuming in the Suez Canal after the vessel was partially refloated on Monday (March 29).

Here is a timeline of the effort to rescue the stranded vessel, which has disrupted global trade:

March 23: The MV Ever Given container ship gets stuck in the Suez Canal after being struck by a dust storm that turns it sideways, blocking traffic in both directions. The area is placed under tight security, with extra military and police personnel deployed.

March 24: A massive effort to refloat the vessel using eight tugboats commences. Much of the focus is on expanding the dredging area at the front of the ship by “removing the sides of the canal. As the blockage threatens the flow of oil through the waterway, oil prices post a pronounced rebound. The rescue effort is complicated by the fact that the accident took place in a part of the canal where the ground was rocky and difficult to dig. This meant that at some point digging will have to be stopped to avoid earth collapsing on to the ship.

March 25: The Suez Canal Authority (SCA) suspends navigation through the Suez Canal until the Ever Given can be refloated. Nine tug boats, with a towing power of 160 tonnes, and two dredges work to free the 400-metre-long and 59-metre-wide vessel. A team from Dutch firm Smit Salvage arrives at the scene and starts to use satellite imagery and video footage to prepare a computer model for refloating the vessel.

March 26: The SCA accepts an offer by a US Navy team of dredging experts to assist in operations to free the vessel. Vessels begin to divert their course on account of the prolonged blockage while rates for charter-hire of vessels climb. Salvage experts determine that the best chance for returning shipping to normal may not come until Sunday or Monday, when the tide will reach a peak.

March 27: Partial success as the ship is moved by 30 metres towards the north and the vessel's rudder is released from the sediment. The rescue effort relies on 14 tugboats pulling the vessel and dredgers trying to free it by removing thousands of cubic metres of sand. As of Sunday. salvage teams had cleared 27,000 cubic metres at a depth of 18 metres

March 28: A fresh attempt to free the Ever Given, taking advantage of high tide, is made. The vessel's front is found to have been damaged after running aground. The SCA prepares to lighten the load on the vessel by removing containers, a time-consuming and difficult operation.

March 29: The giant container vessel is partly freed in a pre-dawn operation, the first step towards getting one of the world's most important trade arteries moving again. The next move will be to inject high pressure water under the bow of the ship to remove sand and clay. If this is unsuccessful, containers might have to be removed from the ship, which will cause a considerable delay.

#BREAKING: watch video of the Ever Given, which was previously clogging the Suez Canal and has now been refloated. Good news in #Egypt.
pic.twitter.com/6HbkeBpA40 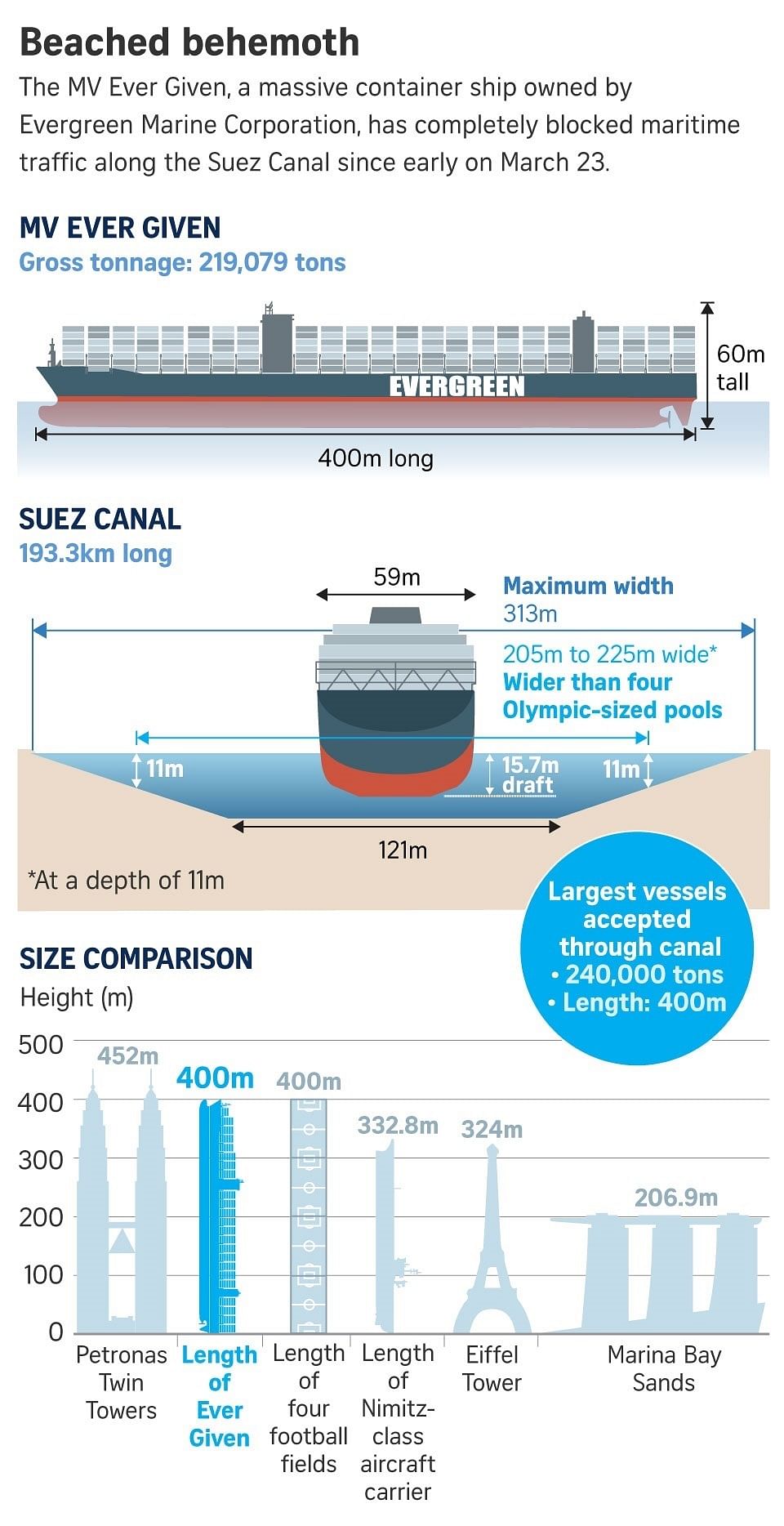