HODEIDAH, YEMEN (AFP) - At least 149 people, including civilians, have been killed in 24 hours of clashes between government loyalists and rebels in Yemen's flashpoint city of Hodeidah, medics and military sources said on Monday (Nov 12).

The Red Sea port city, controlled by Yemen's Houthi rebels since 2014, is a vital entry point for aid into the impoverished country.

A source in Yemen's pro-government military coalition, which is backed by a Saudi-led military alliance, said the Houthis had pushed back a large-scale offensive aimed at moving towards Hodeidah port.

Medics in hospitals across the city reported 110 rebels and 32 loyalist fighters killed overnight.

Sources at the Al-Alfi military hospital, seized by the rebels during their 2014 takeover, said charred body parts had been delivered there overnight.

Military sources confirmed that the Saudi-led alliance had targeted the rebels with multiple air strikes.

Nearly 600 people have been killed since clashes erupted on November 1 in Hodeidah, one of Yemen's most densely populated cities. 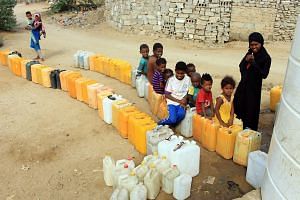 Saudi Arabia and its allies intervened in the Yemeni government's fight against the Iran-backed Houthis in 2015, triggering what the UN now calls the world's worst humanitarian crisis.

The Hodeidah port is a vital lifeline for aid deliveries to Yemenis across the war-torn country, where 14 million people face imminent famine.

The port has been under blockade by the Saudi-led coalition for a year.

The alliance accuses Iran of smuggling arms to the Houthis through the Hodeidah port.