The hawkish White House aide will become the most senior US official to meet Johnson since he succeeded Mrs Theresa May as UK government leader last month.

A spokesman for Mr Johnson said the two will talk about "a range of security issues, including Iran".

The talks on Iran come with US President Donald Trump's administration pursuing a "maximum pressure" campaign designed to force the Islamic republic to limit its nuclear programme and military activities.

Washington also wants its close European ally to drop - or at the very least severely restrict - plans to use 5G technology made by China's Huawei when it rolls out the next-generation data network.

Mr Bolton's two-day visit comes with Britain in political crisis and the pound straddling multi-year lows due to the fast-approaching deadline for the UK to leave the EU after more than 40 years.

Mr Johnson has vowed to meet the twice-delayed Brexit date - now October 31 - even if it means leaving without a proper plan for regulating trade and other ties.

The EU is refusing to re-open negotiations on the deal the bloc's 27 leaders signed last year with Mrs May. Mr Johnson and his supporters call the existing agreement unfair. 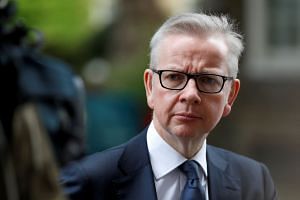 London preparing bailout for firms in event of no-deal Brexit

EU's Juncker tells Britain: No-deal Brexit will hurt you the most

But a clean break with the EU would let the UK to immediately launch negotiations on a free trade agreement with the United States.

The US president openly rooted for Mr Johnson during his campaign for Mrs May's job following her resignation over the Brexit impasse.

He branded Mr Johnson as Britain's Trump and said the sides were on the verge of making a breakthrough in ties.

Britain and its European allies have irritated Mr Trump's team by trying to save a landmark nuclear agreement with Iran from which Washington pulled out last year.

Britain last week decided to join forces with the US to protect merchant vessels in the Gulf.

It marked a departure in policy for Mr Johnson following Mrs May's attempts to a form a European-led group.

Britain's decision on Huawei - a private firm that Washington says is obliged to obey orders to spy for the Chinese government - has been repeatedly delayed due to mixed signals from Mr Trump about his own administration's next steps.