LONDON/SEOUL • Efforts to secure safe passage through the Strait of Hormuz are ramping up, with Britain deploying a second warship in the area and South Korea saying it may deploy its own unit as part of a multinational force for the Gulf.

Tensions have flared in the strait, a vital thoroughfare for the energy industry, in recent weeks as Iran pushes back against US sanctions that are crippling its oil exports.

Iran's Revolutionary Guard is still holding the Stena Impero, a British vessel it detained on July 20, in retaliation for British forces seizing an Iranian tanker on July 4 near Gibraltar for allegedly violating sanctions against Syria.

The tanker stand-off has escalated regional strains over renewed US sanctions on Teheran after President Donald Trump last year pulled out of the nuclear deal with Iran.

Britain yesterday ruled out swopping the seized oil tankers with Iran to dial back tensions.

"There is no quid pro quo," British Foreign Secretary Dominic Raab told BBC radio. "This is not about some kind of barter. This is about international law and the rules of the international legal system being upheld," he said.

Iranian President Hassan Rouhani had hinted earlier that he was open to a tanker swop. 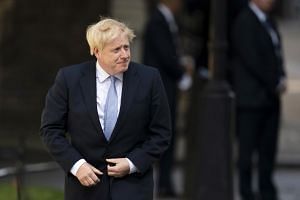 The United Kingdom has deployed the HMS Duncan, one of its Type 45 destroyers, to shepherd British-flagged ships through the strait, its defence ministry said in a statement on Sunday. It will operate alongside the Royal Navy's Type 23 frigate HMS Montrose until late next month, London said.

The United States and Europe are seeking to establish separate maritime security initiatives, and the UK said last week that further measures would be taken to respond to Iran, without giving details of the plans.

"Freedom of navigation in the Strait of Hormuz is vital not just to the UK, but also our international partners and allies," British Defence Secretary Ben Wallace said in the statement. "Merchant ships must be free to travel lawfully and trade safely, anywhere in the world," he added.

Meanwhile, South Korea is considering sending its Cheonghae naval unit to the strait for participation in a US-led coalition, the Maeil Business Newspaper reported yesterday, citing an unidentified government official.

A defence ministry spokesman, Ms Choi Hyun-soo, said the government is considering "various options to ensure South Korean vessels' safety" but nothing has been finalised.

Separately, Oman, which shares the strait with Iran, said it was in talks with "all parties" to restore stability to the waterway.

"We don't mediate, but in this case we are more concerned than others to ensure the stability of navigation," Foreign Minister Yousef bin Alawi said after discussions with Iranian officials in Teheran.

Meanwhile, Iran's foreign ministry spokesman Abbas Mousavi said yesterday the US had rejected its offer for more robust nuclear inspections in exchange for lifting sanctions because Washington is "not seeking dialogue".