MOSCOW (AFP) - Russia said on Thursday (March 28) its troops will stay in Venezuela "for as long as needed", rejecting US President Donald Trump's demand that Russia remove its military from the crisis-stricken country.

Russia's weekend deployment of troops and equipment to bolster President Nicolas Maduro has ratcheted up already high international tensions over Venezuela, where the Trump administration is pushing for regime change.

The Russian Foreign Ministry insisted on Thursday the presence of its troops there did not pose a threat to anyone.

"They are involved in the implementation of agreements in the sphere of military and technical cooperation," said ministry spokeswoman Maria Zakharova, adding they would remain in the country "for as long as needed".

"Russia is not changing the balance of power in the region, Russia is not threatening anyone unlike citizens in Washington whom I have just quoted," she told reporters.

She was referring to Mr Trump's comments that "Russia has to get out" of Venezuela as well as to statements by US Secretary of State Mike Pompeo that Washington does not plan to negotiate with Mr Maduro and wants to end Russia and Cuba's influence on Caracas.

The United States and more than 50 other countries recognise Venezuelan opposition leader Juan Guaido as interim president, while Russia, along with China, backs Mr Maduro.

"Neither Russia nor Venezuela are provinces of the United States," Ms Zakharova said. 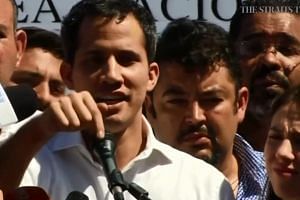 Mike Pompeo says all US diplomats have left Venezuela

How bad is Venezuela's economy? Even the criminals are struggling to get by

Russian Foreign Minister Sergey Lavrov has accused Washington of trying to "organise a coup d'etat" in the oil-producing nation.

Venezuela's military attache in Moscow also said on Thursday that Russian troops were in the country under an agreement on military and technical cooperation and not to carry out a military operation.

A Russian air force Antonov-124 cargo plane and a smaller Ilyushin Il-62 landed at the main airport outside Caracas on Saturday and offloaded around 100 troops and tonnes of equipment.

"As for the presence of Russian specialists, we are talking about cooperation, military and technical cooperation," the attache, Mr Jose Rafael Torrealba Perez, was quoted as saying in translated comments by RIA Novosti state news agency.

"We are absolutely not talking about Russia's military presence to carry out military operations," he added.

Venezuela's Defence Minister Vladimir Padrino Lopez is expected to visit Moscow in April as part of the cooperation between the two countries, the attache said.

On Tuesday, Ms Zakharova declared that Russia was "developing cooperation with Venezuela in strict accordance with the Constitution of that country and with full respect for its legal norms".

"The presence of Russian specialists on Venezuelan territory is regulated by an agreement between the Russian and Venezuelan governments on military and technical cooperation that was signed in May, 2001," she said.