The passenger who caused a plane to make an emergency landing because he smelled so bad last month has died, according to British reports.

The 59-year-old man has been identified as Mr Andrey Suchilin, a Russian musician.

According to reports, Mr Suchilin had suffered an infection from a flesh-eating disease while he was on holiday in the Canary Islands.

It was previously reported that the Transavia flight he was on, which was travelling from the Netherlands to Spain on May 30, had to make a flight diversion due to his "unbearable" body odour.

Passengers onboard Flight HV5666 began to vomit and faint from the stench emanating from the man. Staff had also tried to quarantine him in the toilet, but to no avail.

One of the passengers had said: "It was like he hadn't washed himself for several weeks." 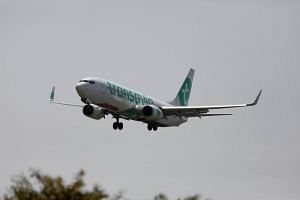 Pilots then decided to make an emergency landing in the Portuguese city of Fargo, where Mr Suchilin was taken by medical personnel onto a bus.

On Thursday (June 28), several British news outlets including the Mirror reported that Mr Suchilin has died from the disease.

He was suffering from severe tissue necrosis, or gangrene.

According to Russian news channel RT, Mr Suchilin wrote on his Facebook page shortly after the plane made the diversion.

"The tragic and comic component of this whole situation is that I caught a disease, which (let's not say how and why) makes a person quite stinky," he said, according to a translation by RT.

After alighting from the plane, Mr Suchilin was hospitalised in Portugal, where he battled the disease with multiple operations, according to his Facebook page updated by his girlfriend Lidia Tikhonovich.

According to the Facebook posts, doctors were unable to figure out the exact cause of the necrosis.

On Monday (June 25), his health deteriorated and he died from multiple organ failure.

Mr Suchilin was known as one of the top guitar players in Russia and was considered a pioneer of rock music in the Soviet Union.