A tweet by Ms Remi Maalouf, a news anchor with television channel Russia Today, highlights Mr Putin's colourful take on terrorism: "To forgive them is up to God, but to send them to him is up to me."

In the wake of the Paris terrorist attacks on Nov 13 which killed at least 129 people, Russia and France agreed to coordinate their military and security services against Islamic State in Iraq and Syria (ISIS) militants in Syria.

Mr Putin, speaking to his top military officials, had vowed merciless retaliation for the attacks, as warplanes from both countries unleashed bombs on the ISIS stronghold of Raqa earlier this week.

"It's necessary to establish direct contact with the French and work with them as allies," he said. 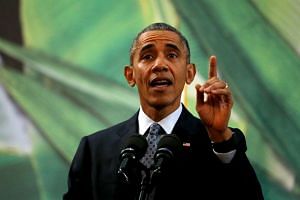 The urgency of the unusual alliance was also due to Tuesday's revelation that ISIS was responsible for planting a homemade bomb that ripped apart a Russian passenger jet over Egypt on Oct 31.

That incident claimed the lives of all 224 people on board, most of whom were Russians returning home from a vacation.

Mr Putin responded by saying it was one of the bloodiest acts in modern Russian history, vowing that the effort to bring ISIS to justice would be relentless.

"We will search for them everywhere wherever they are hiding. We will find them anywhere on the planet and punish them," he added.