"To forgive the terrorists is up to God, but to send them to him is up to me."

It almost sounds like something Russian President Vladimir Putin could, and would, say.

Except that he didn't.

The quote, which was attributed to Mr Putin, was tweeted on Tuesday (Nov 17) by Ms Remi Maalouf who works for television channel Russia Today. It had been making the rounds on social media since.

This is the danger of social media! I took Putin's quote from a post on Facebook & it turned out to be false. I apologize.

The quote had gone viral as netizens largely praised Mr Putin for taking a definitive stance against terrorism, in the wake of the Nov 13 Paris attacks.

The downing of a Russian passenger jet in Egypt on Oct 31, which has since been traced to a homemade bomb planted on board by Islamic State in Iraq and Syria (ISIS) militants, also provoked a strong response from Russia. 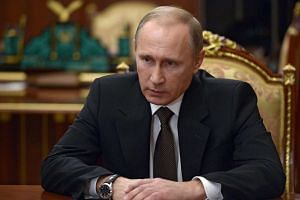 Earlier this week, Russia and France formed an unlikely alliance as they agreed to coordinate their military and security services against ISIS, with both countries dispatching warplanes to bomb the group's stronghold of Raqa.

Mr Putin had said then: "The murder of our people over Sinai is one of the bloodiest crimes in terms of the lives it claimed. We will not dry our tears - this will remain forever in our hearts and minds. However, this would not stop us from finding and punishing the perpetrators.

"We have to do it without any period of limitation; we need to know all their names. We will search wherever they may be hiding. We will find them anywhere on the planet and punish them."

The closest thing anyone has uttered about sending terrorists to God comes from American actor, Denzel Washington. His character in the 2004 movie Man on Fire discusses who exactly is responsible for arranging meetings between bad guys and God, as US News reports.

Denzel Washington: Forgiveness is between them and God.