BERLIN (BLOOMBERG) - German authorities are dismissing United States President Donald Trump's threat to cut off intelligence if they do not take steps to keep equipment made by China's Huawei Technologies out of the nation's fifth-generation mobile network, according to four people with knowledge of the matter.

The view in Germany's intelligence community is that the two allies rely on each other too much to risk jeopardising crucial data sharing, said the people, who asked not to be identified by name because the discussions are private.

They see the warnings on ending intelligence sharing as political grandstanding.

The sentiment in Berlin reflects the difficulty the Trump administration faces in its attempts to block Huawei from 5G networks because of alleged Chinese espionage. Germany is among European allies who have baulked at US calls to ban the Shenzhen-based telecommunications equipment maker, opting instead to erect security barriers.

In a letter to the German government last month, US Ambassador Richard Grenell said intelligence sharing would be curtailed if Huawei components were used in Germany's 5G network. Secretary of State Mike Pompeo has doubled down on the message, saying Huawei facilitates espionage by Beijing.

Chancellor Angela Merkel has maintained that security is a priority in Germany's efforts to expand 5G, while pushing back on US pressure. She issued a mild rebuke when asked about Ambassador Grenell's letter, saying: "We'll define our standards for ourselves."

In a statement, the US embassy in Berlin said that the presence of "untrusted vendors", including Chinese equipment, compromises sensitive lines of communication among allies. 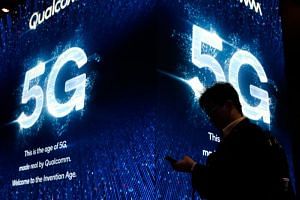 US warns Germany a Huawei deal could hurt intelligence sharing

"If that risk exceeds the threshold for the United States, we will be forced to limit information sharing in the future," embassy spokesman Tamara Sternberg-Greller said in the statement on Wednesday (April 17).

"We continue to warn our allies, including Germany, about the dangers insecure 5G equipment present to their economies and national security," she said.

Huawei has called US accusations over spying baseless. Mr Abraham Liu, the company's representative to European Union institutions, told Bloomberg TV on Monday that "the truth has to be based on the facts and the facts have to be verifiable".

German officials argue that US and German spy agencies need each other's resources to tackle global conflicts. Not only do the Germans benefit from the vast array of US intelligence, but Germany's Federal Intelligence Service, or BND, supplies American spies with crucial information from across eastern Europe, Russia and the Middle East.

The espionage partnership survived its greatest test after Edward Snowden leaked documents in 2013 revealing the breadth of spying activity of the National Security Agency (NSA), including the revelation that the NSA had tapped Dr Merkel's mobile phone.

In the six years since, which included a German parliamentary investigation into the NSA and a cloak-and-dagger stand-off that resulted in the expulsion in July 2014 of the Central Intelligence Agency's Berlin station chief, there has been little sign that US-German intelligence cooperation has ebbed.

US found evidence against Huawei via secret surveillance: Prosecutors

"The German intelligence service, contrary to perceptions here, is quite a useful tool," senior fellow Jan Techau at the German Marshall Fund in Berlin said in an interview. "It's an interesting resource for the Americans."

On Huawei, there are also signs of tensions easing. Last month, the White House dispatched one of its top advisers on cyber security, Mr Joshua Steinman, to Berlin to discuss the Chinese company with German officials. While he reiterated US warnings over the risk, he expressed encouragement about German security measures aimed at protecting its network.

German Interior Ministry officials said they are optimistic that the US is warming to certification barriers being put in place. Interior Minister Horst Seehofer said on March 21 that US officials had been very impressed.