SHENZHEN - Chinese tech giant Huawei has once again hit back against claims that its equipment or software can be used by Beijing for spying, equating such acts to committing corporate suicide.

"As a commercial organisation, it is common sense that if we install backdoors or collect intelligence on behalf of others, it is equal to committing suicide. We have no motivation to commit suicide," said the company's chief legal officer Song Liuqing on Friday (March 29).

Mr Song was speaking at a press conference on the release of Huawei's annual report, along with other top executives.

He added that the Chinese government would rather have the tech giant pay taxes, create jobs and drive the economy than use it "as a tool to attack others".

These results come even as the world's largest telecoms manufacturer is facing increasing global pressure amid claims led by the United States that Beijing could use its equipment for spying. 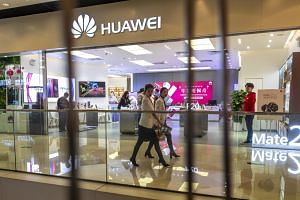 From Paris and croissants to castles and piazzas: Welcome to Huawei's new R&D hub

So far, both the US and Australia have banned Huawei from its networks, with the US pressuring European allies to follow suit.

The issue took centre stage at the press conference for foreign and international media at the company's Shenzhen headquarters.

Company executives were asked if Huawei was required to comply with China's National Intelligence Law, which mandates Chinese companies like Huawei have to cooperate with intelligence services.

Mr Song said this applied to cooperation within the "scope of the law" only, such as if intelligence was needed to stop crime or terrorism, and "not meant for Beijing to use Huawei to attack other parties' networks or collect intelligence".

Huawei's rotating chairman Guo Ping said the company had nothing to do with the global spate of cyber-security incidents in the past two years, and that the US was out to sully the company's reputation.

"The US is the most powerful country in the world, and the leader in many domains, but the US government has a loser's attitude. They want to smear Huawei because they are unable to compete in certain domains," said Mr Guo.

He stressed that the company's products were secure and exceeded industry standards for cyber security.

Huawei is pushing aggressively for leadership in 5G technology, at a point in time where countries around the world are looking to roll out these next-generation networks.

Mr Guo said that as of last month, Huawei has signed more than 30 5G commercial contracts and shipped more than 40,000 5G base stations.

He added that he was expecting to see large-scale deployment of 5G networks this year, which would increase the company's revenues in this area.