DAVOS (AFP) - Pastor Marc Schmed stands in the snow outside his church in the small Swiss ski resort town of Davos, waiting for permission to enter.

The Freie Evangelische Gemeinde, or the English Church, is one of more than a dozen buildings in the town that have been rented out to multinational corporations for events during the annual World Economic Forum meeting of the rich, famous and influential.

Inside the church, around 20 workers are putting the finishing touches on the transformation: Danish online payment company Tradeshift has made this "The Sanctuary", where discussions are being hosted by business TV channel CNBC with the likes of Hollywood star Matt Damon, on the sidelines of the official WEF programme.

They have raised the floor so it sits atop of the pews usually used by parishioners, and have created a stage bordered by screens, with the still visible organ pipes one of the few reminders that this is a church.

All around town, shops and businesses have received similar makeovers, while some corporations like Facebook have built entire temporary buildings, with owners of the land profiting handsomely.

Schmed won't say how much his church is getting for the rental, saying only that "I'm told we could have asked for more".

The event is drawing about 3,000 political and business figures, including around 60 government leaders.

When staff, entourages and media covering the event are counted, a total of around 11,000 people have badges to enter the week-long event - effectively doubling the number of people in the town, and creating desperate attempts to secure accommodation during the event.

Businesses and residents in Davos are estimated to pull in around 50 million Swiss francs (S$68.3 million) in sales during the WEF, according to the municipality, with hotels snagging nearly half of the total.

"Tourism is so important here that every bakery, every store profits... For the local economy it is very, very important," Samuel Rosenast, head of communications at Davos Tourism, told AFP.

Adrian Weber, who runs a bakery that has been in his family for four generations, says he has staff working 24 hours a day during the week to service hotels and the forum itself.

"Sales are maybe two to three times higher" than normal, he said.

Hotel rooms during the five-day forum have been sold out in Davos for months, with prices 10-20 times higher than rates paid the rest of the year.

Many Davos residents also opt to leave town during the event, raking in tens of thousands of francs by renting out their homes for a few days.

Schmed said the decision four years ago to begin renting out the church had come at a time when the institution was struggling financially. 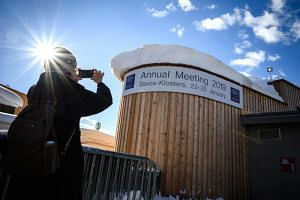 World Economic Forum 2019: Stage set for another powwow in Davos 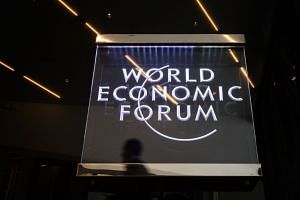 Hundreds of hotel rooms vacant after pullout by US delegation

"Not everyone is fond of this decision," he admitted.

But it has allowed the church to install a new heating system and do more community outreach, he said.

Schmed acknowledged that the money that pours into Davos this time of year prompts greed.

It was not uncommon for people to pull in a year's worth of rent for just five days.

"This raises moral issues. It is not good," he said.

The huge influx into the small town can also cause a range of headaches for residents.

Last year, when US President Donald Trump stole the spotlight at the forum, the logistical challenge combined with heavy snowfall to leave the town facing weeks of traffic chaos.

This year, the municipality has created new rules, including calling for snow-clearance day and night.

But Remo Gross, who runs a small kiosk in the centre of Davos, says his commute, which usually takes seven minutes, rises to two hours during WEF week.

Thanks to WEF, "Davos is known all over the world", he added.

Rosenast said that from a tourism perspective, the WEF was largely a blessing, with social media chatter and snow shots broadcast worldwide providing "free marketing". "That is maybe our highest impact during this week."

And while there are no available beds for regular tourists, many skiers choose to come to Davos on day-trips during the WEF week.

"This is kind of a special thing: go skiing during the WEF, because there are no people on the slopes," Rosenast said.

Schmed meanwhile said that renting out his church did not mean his congregation would be left out in the cold.

He said he had agreements with other churches to allow space for services and prayer meetings.

Through the week, "we have sessions every night to pray for the WEF and for their decisions".