LONDON (WASHINGTON POST) - Mr Boris Johnson was jeered during his first trip as prime minister to Scotland on Monday (July 29). He didn't get the warmest reception from the First Minister of Scotland, Ms Nicola Sturgeon, either.

Mr Johnson left Ms Sturgeon's official's residence out the back door, avoiding another confrontation with protesters.

It has become something of a ritual for British leaders to demonstrate their commitment to the union with an early tour of England, Scotland, Wales and Northern Ireland - or, as Mr Johnson called them, "the awesome foursome that are incarnated in that red, white and blue flag."

But there is much animosity toward Mr Johnson in Scotland, and palpable dread over leaving the European Union - especially by way of the hard, "no-deal Brexit" that the new prime minister says Britain must prepare for.

All of which has led to renewed talk of a crack-up.

On Mr Johnson's first full day as Britain's head of government last week, Mr Ian Blackford, the Scottish National Party's loquacious leader in Parliament, stood in the House of Commons and welcomed "the last prime minister of the United Kingdom."

Scottish voters rejected independence, 55 per cent to 45 per cent, in a referendum in 2014. Now, Scottish nationalists are hoping that Mr Johnson's premiership will help their cause.

Mr Blackford has called Mr Johnson a "recruiting tool." A Sunday Times poll last month, before Mr Johnson's selection, found that 49 per cent of Scots favoured independence but that the number would rise to 53 per cent in the event Mr Johnson became prime minister.

It's far from clear whether Mr Johnson will continue to tip the scales in favour of independence, or whether the new prime minister may yet win over Scots with his shiny optimism and numerous public-spending pledges.

In Scotland on Monday, Mr Johnson praised "the most successful political and economic union in history" and sought to assure the north that "we are a global brand, and together we are safer, stronger and more prosperous."

He also voiced his opposition to another independence vote, calling the 2014 referendum a "once in a generation event," and warning that a do-over would undermine public faith in democracy.

Mr Johnson defended his assertion that former Prime Minister Theresa May's withdrawal agreement was "dead" and that he could strike a new, better deal - despite assertions by European leaders that there will be no renegotiation.

"We are not aiming for a no-deal Brexit at all," Mr Johnson told reporters, even as his new minister charged with preparing for a no-deal departure, Mr Michael Gove, said the government now assumed it would exit without a deal.

Professor John Curtice, a politics expert at the University of Strathclyde, said that if a Mr Johnson government leaves the bloc without a deal, "and if it's as bad as some claim it will be, then obviously it's easier for the (Scottish Nationalist Party) to pursue the independence argument."

Prof Curtice added that Mr Johnson - who was a leader of the Brexit campaign in 2016 - is deeply unpopular across the United Kingdom with people who voted against Brexit. Of the four nations, Scotland and Northern Ireland voted to remain in the EU; England and Wales voted to leave.

Indeed, Scottish nationalists are not alone in warning of the union coming apart.

In a rare intervention in British politics, Irish Prime Minister Leo Varadkar said on Friday: "One of the things, ironically, that could really undermine the union, the United Kingdom union, is a hard Brexit." Mr Varadkar suggested that "a nationalist Britain" might encourage more people in Northern Ireland to want to disassociate themselves.

"People who you might describe as moderate nationalists or moderate Catholics, who were more or less happy with the status quo, will look more towards a united Ireland," Mr Varadkar said.

Some in Britain have sounded similar alarm bells.

Mrs May's de facto deputy prime minister, Mr David Lidington, told the BBC this month that the union "would be under much greater strain in the event of a no deal." He added: "My view comes not just from Scottish nationalism and pressure for Irish unification - it comes from indifference among English opinion to the value of the union."

Mr Johnson prevailed over his rival with a total 92,153 votes in a contest that involved only dues-paying members of the Consevative Party - who make up about 0.35 per cent of the UK electorate and largely live in the southern half of England. 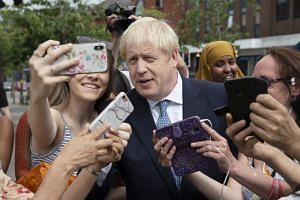 Bully or broker: EU wonders which Boris Johnson will come to Brexit talks

What next? Brexit scenarios under PM Boris Johnson

Hours after he won, hundreds of protesters gathered in central Glasgow, some carrying placards that read "Boris No! Independence Yes!" "It's an English vote, an English prime minister," said Mr Gary Kelly, 44, who started planning the protest a week before. "Boris is a racist, a homophobe. He's a bigot. He's not the kind of person Scotland wants representing them."

A YouGov survey last week showed that 65 per cent of Scots thought that Mr Johnson would be a "poor" or "terrible" prime minister.

Even Ms Ruth Davidson, who should be Mr Johnson's natural ally as leader of the Conservative Party in Scotland, has been notably lukewarm on him.

Ms Davidson - has helped to transform her party's fortunes north of the border, winning 13 seats in Parliament in the last election - reportedly banned Mr Johnson from attending the recent Scottish Tory conference. She backed his rivals in the leadership contest. During the 2016 EU referendum, she fired up the pro-EU side by saying that Mr Johnson's side had told a series of lies.

Now that Mr Johnson is leader, Ms Davidson has said she would judge him "by his actions in office." They met together on Monday.

"He's a disaster for her," said Mr Thomas Lundberg, a lecturer in politics at the University of Glasgow. Mr Johnson represents the "quintessentially English posh person who has made it through privilege and contacts, rather than merit."

Mr Johnson has dismissed accusations that he is unpopular in Scotland. When asked about it in Parliament last week, he responded by explaining "why I seem to get a good reception in Scotland."

"It may be because the people of Scotland recognise that they have a common-sensical Conservative approach, which would not hand back control of their fisheries to Brussels just as Scotland has regained control of its fantastic fish," he said.