LONDON (BLOOMBERG) - British Prime Minister Boris Johnson will not start talks with European Union leaders over Brexit unless they first agree to his demand to reopen the divorce deal they struck with his predecessor, Theresa May, his office warned on Monday (July 29). So far, EU leaders have refused.

The pound fell to its lowest in two years on growing fears the new premier will steer Britain into an economically damaging no-deal split.

Mr Johnson stepped up the government's preparations for leaving the EU without an agreement as his senior officials warned that the country will have no choice, if the bloc does not change its approach to further negotiations.

With fewer than 100 days left until the UK is due to exit the 28-member bloc on the deadline of Oct 31, Mr Johnson is tearing up the way Britain's government operates to ready the country for the potential impact of a no-deal breakup.

More money is being made available for contingency planning, and a mass public information campaign will launch in the weeks ahead to advise businesses and citizens how to prepare.

Mr Johnson has packed his Cabinet with pro-Brexit ministers and officials who led the 2016 Vote Leave campaign with him, to ensure every part of the state is geared towards exit day on Halloween.

The prime minister still says he wants a deal with the EU but has two key conditions: the bloc must re-open the Withdrawal Agreement it negotiated last year, and it must agree to scrap the so-called backstop guarantee for the Irish border - the provision intended to ensure there's no need for checks on goods crossing the land border with Ireland.

Mr Johnson has said the backstop is "undemocratic" because it risks locking the UK into a trading relationship with the EU indefinitely.

EU leaders have repeatedly said they're not prepared to revise the deal that Mrs May tried and failed to get approved by the UK Parliament and that any accord must contain the backstop.

As a result, Mr Johnson sees no point in meeting with them face-to-face, his spokeswoman Alison Donnelly said on Monday.

"The prime minister will be happy to sit down with leaders when that position changes, but he's making it clear to everybody he speaks to that that needs to happen," she said.

While the government would prefer to leave with a deal, Ms Donnelly said, its "central scenario" is to do so without one unless the EU shifts its position. The pound fell more than 1 per cent. 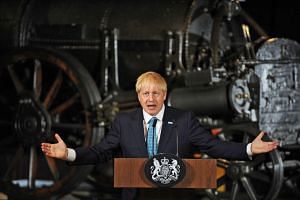 During a trip to Scotland, Mr Johnson insisted he still believed a deal was achievable.

"We're very confident, with goodwill on both sides, two mature political entities - the UK and EU - can get this done," Mr Johnson said in televised comments.

"It's responsible for any government to prepare for a no deal if we absolutely have to. That's the message I've been getting across to our European friends. I'm very confident we'll get there."

The key point for the EU to understand is that the backstop is "dead," along with May's withdrawal agreement, he said.

Mr Johnson's office said he is expected to continue speaking on the phone to EU leaders over the coming days. He's been telling them that he won't meet them only to be told that "they cannot possibly reopen the withdrawal agreement," Ms Donnelly said.

Officials in both the UK and Ireland said Mr Johnson and Irish Prime Minister Leo Varadkar are expected to speak soon.

But there's no sign of the EU shifting its position. According to an Irish government spokesman, Foreign Minister Simon Coveney spoke to his UK counterpart Dominic Raab on Friday, reiterating that the withdrawal agreement is closed.

On Monday, a European Commission spokeswoman said that while an orderly withdrawal is in everyone's interest, the bloc is well-prepared for a no-deal Brexit.

The EU has repeatedly said that the only way to make the contentious backstop provision redundant would be for the UK to change its red lines and opt to stay in the EU's single market and the customs union. Mr Johnson has pledged not to do this.

The British government has dramatically stepped up its planning for a no-deal Brexit and on Monday, his Brexit enforcer, Michael Gove, led the first daily meeting of top officials working to get the country ready to leave on time.

Mr Johnson also held talks in Scotland with Ruth Davidson, leader of the Scottish Conservatives, who opposes a no-deal Brexit, and First Minister Nicola Sturgeon, who wants to keep Scotland in the EU.

On Tuesday, Mr Johnson will travel to a farm in Wales to hear the views of agricultural workers on their hopes for Brexit. Speaking before his trip, he said Brexit would allow the UK to scrap the EU's Common Agricultural Policy and export more food and farm produce around the world when new trade deals are signed.

"Once we leave the EU on Oct 31, we will have a historic opportunity to introduce new schemes to support farming - and we will make sure that farmers gets a better deal," Mr Johnson said.