LONDON - British Prime Minister Theresa May has defeated an attempt to oust her from power after a majority of MPs from her own ruling Conservative Party reaffirmed their confidence in her leadership.

With all the ballots of the Conservative MPs now counted, Mrs May won the vote on Wednesday (Dec 12) by 200 to 117.

"The parliamentary party does have confidence in the Prime Minister," said Sir Graham Brady, the party's parliamentary leader, to roars of approval from legislators.

Still, Mrs May's position was weakened by the rebellion of her backbenchers. And although she overcame the challenge, she faces a much bigger hurdle: How to persuade Parliament in London to approve a deal for Britain's withdrawal from the European Union.

Dissatisfaction with Mrs May's style of government has been building up for months. But it reached new intensity with the Prime Minister's deal for Brexit, as the process of Britain's separation from the EU is widely known.

The deal, which envisages Britain leaving the EU only after a lengthy transition period, has succeeded in infuriating both those who support Brexit and now accuse Mrs May of not negotiating better terms from Europe, and those who support Britain's continued EU full membership and therefore regard the current deal as irrelevant.

Under her party's internal rules, Mrs May needed a total of 159 votes in her favour to remain prime minister; this figure represents just over half of the total Conservatives sitting in Parliament. 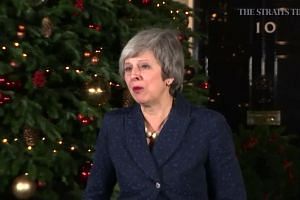 In the event, Mrs May secured the support of 200 MPs, or almost two-thirds of the total Conservative parliamentarians.

However, the Prime Minister's challenges are far from over.

Although support from her own backbenchers appears to have been substantial, the reality still is that a total of 117 MPs from her own party were prepared to vote against her, a higher figure than initially anticipated, and a tally which will continue to have an adverse effect on Mrs May's political legitimacy.

Furthermore - and in an effort to retain her party's allegiance - Mrs May promised that she will voluntarily leave power before 2022, when the next general election is scheduled. The result is that, although the British Prime Minister is secure for the moment, it won't be long before speculation on who could take over is rekindled.

Speaking soon after the results of the party ballots were announced, Mrs May referred to her "renewed mission" to "bring the country back together and building a country that really works for everyone".

But the immediate challenge for Mrs May is that, although she has survived as Britain's leader, the Brexit treaty she so patiently negotiated with the EU over two years now looks to be beyond salvation in the British Parliament.

The Prime Minister will head to Brussels on Thursday, where the heads of governments of the EU's other 27 member-states are gathering for a summit.

Mrs May hopes to persuade her European counterparts that she needs modifications to the existing Brexit treaty, if the document is ever to be acceptable to British legislators.

But although EU leaders have watched the political bickering in London with growing alarm and now appear keen to soften some of the provisions in the Brexit deal in order to help Mrs May to get it past the British Parliament, no one in Europe wants to reopen the entire negotiations, and no one is prepared to accept fundamental changes to the existing Brexit deal.

At best, therefore, Mrs May could help secure some symbolic EU concessions, but none of them will be substantial. And that may not be enough for British legislators.

Still, Mrs May does derive one substantial advantage from the current political mayhem in London: Having survived the rebellion from within its ranks, she cannot be challenged again for at least a year.